The New Christian Bible Study Project is an online clearinghouse for people who are interested in the Bible, not just in its powerful literal sense, but also in its inner, spiritual sense.

The idea that the Bible has an inner meaning is an old idea. Jesus knew it, and referred to it. He frequently showed that the Old Testament contained deeper meanings than were first apparent. For example, Jesus told His disciples that the Old Testament contained many prophecies about His own life that they had not understood. "Beginning at Moses and all the Prophets, He expounded to them in all the Scriptures the things concerning Himself." (Luke 24:27)

"He opened their understanding that they might comprehend the Scriptures." (Luke 24:45)

For many centuries before Jesus's time, Jewish theologians were studying the Old Testament, and developing "commentary" on it -- exploring its inner meaning. The "Oral Torah" dates back perhaps as far back as the time of Moses, though it wasn't written down in a form called the Mishnah until the second century of the Christian Era. In the Christian church, commentary dates back almost to the time of Christ, and has continued to the present day.

The theological underpinnings of this site are based on Emanuel Swedenborg's religious works from the 1700's. Although Swedenborg himself isn't well-known today, the influence of his theological works has been both wide and deep.

Among other things, Swedenborg published detailed expositions of the Book of Genesis, the Book of Exodus, and the Book of Revelation, or the Apocalypse. He also outlined the inner meanings of the Psalms, and the Prophets, and cited other scripture passages extensively.

Swedenborg wrote in Latin, but his books have been translated into many languages, and we hope to bring together many of them here for worldwide readers. So far, in our main database, we have most of the existing English translations, the original Latin versions, and some translations in Portuguese, French, Spanish, Swedish, Norwegian, German, Dutch, Czech, Chinese, Korean, and other languages.

In our on deck page, we have some of Swedenborg's works in several other languages, too, in .pdf format. We're going to import them into the main database as soon as we can, but they're online now, and ready for your use.

We have also gathered Bible translations in most of the major languages, so that Bible readers have a comfortable, easy-to-use place to read and study the Word of God, and to readily cross-link to explanatory content.

One of the key pieces of our project is that we're also adding plain-language explanations of Bible stories, verses, and words that are designed for modern readers. We're adding videos, too, and artwork that helps illustrate concepts.

This project is being carried forward by the New Christian Bible Study Corp., a registered non-profit 501(c)3 organization that was set up for this purpose. We hope that this site will be useful to you in your spiritual journey. 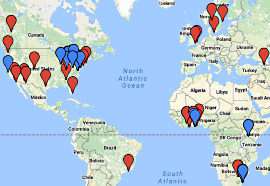 Swedenborg's great exegetical work, Arcana Coelestia, from the 1750's, describes the inner meaning of the books of Genesis and Exodus. The late Rev. Risto Rundo, a Swedenborgian scholar and theologian, translated it into Serbian. We got permission to use it, and hyperlink it, and... here it is! It's far from perfect (we've had a hard time getting our text processing routines to work with this text), but it's good enough to be useful, and it's online, (and we'll keep fixing links and formatting.) Zdravo Svete!

There are more than 30 million Tagalog speakers in the Philippines, and around the world. And... we get a lot of visitors who come to read the Bible in a Tagalog translation. So, we made a user interface for them, too. Courtesy of our friend Luri - thank you! Here's a link.

The new version of the "Swedenborg Reader" app from the New Christian Bible Study is available now in Google's Play Store and Apple's App Store! If you want to be able to read and search Swedenborg's works on your phone or tablet, when you DON'T have a reasonable web connection, this is the way! You can read, listen, print, share, cite... lots of good new features. Hope you try it, and like it! Here's a link.

We just posted new chapter commentaries for Psalms 31, 32, and 33, from Julian Duckworth. The explanations are good; we think you'll get new, useful insights from them. Here's a link!

We just marked up and imported a Chinese translation of volume 6 (of 12!) of "Arcana Coelestia". It contains Swedenborg's explanations of the internal meaning of chapters 32-38 of Genesis. Here's a link to the place where the latest installment of 属天的奥秘 begins.

Swedenborg penned a brief (for him) "Invitatio" to the New Church, in 1771, near the end of his publishing career. It's a useful overview of New Christian thought. We just posted a Dutch translation of it, by Anton Zelling, here: Uitnodiging tot de Nieuwe Kerk.

Last week, we published chapter commentaries for the Gospel of Matthew. This week, we've readied Ray Silverman's explanations of the Gospel of Mark. We're getting good feedback on these; people are finding them to be really useful. Here's a link to Mark chapter 1, side by side with its explanation.

We're really pleased to bring you commentaries from Rev. Julian Duckworth on the inner meaning of 8 more Psalms. Here's a link to Psalm 9 with its commentary.

This morning, we took another step towards having a good working set of Spanish translations of everything. Here's an updated translation of Swedenborg's work, "Doctrine about Life""Doctrina de Vida para la Nueva Jerusalén".

Way back in 1758, Emanuel Swedenborg, one of history's great Bible scholars, picked up his quill pen and started to explain the internal sense of the "Book of Revelation". In 1759, he left off with this 5 volume manuscript, and turned to other work. Later, he came back to "Revelation", rewrote his exegesis of it, and published "Apocalypse Revealed", in two Latin volumes, in 1766. After Swedenborg's death in 1772, his heirs and readers published many of his works that had been left in manuscript, including "Apocalypsis Explicata". It's been translated into English at least twice. We just cleaned up John Whitehead's translation of it, fixing hundreds of problems that were lingering from our first attempt to mark it up for online use.

We're having a big week. We just posted chapter summary explanations for each chapter in the Gospel of Matthew. They're by Rev. Dr. Ray Silverman, the editor of "Light in My Darkness", by Helen Keller, and the author of "Rise Above It", a popular multi-faith spiritual guidebook. Here's a link to Matthew chapter 1, side by side with Ray's explanation of it, and of course you can navigate from there!

Coming now to theaters near you... more explanations of the Psalms. September 2, 2020:

We've been posting chapter-level commentaries on the inner meaning of the Psalms. We just got more new ones from Rev. Julian Duckworth, for Psalms 51-58, and 76-83. They're very good! Here's a link to Psalm 51 with its commentary.

If they do, we can help! We just posted another chunk of Swedenborg's Genesis exegesis, translated into Zulu by friends in South Africa. Here's a link to "Izimfihlakalo Zezulu ", translated by Zamokhule T. Zungu.

We shall see... we're pretty sure that some will! We just imported a Serbian translation of "Bračna Ljubav". It's a book about the wonderful potential for love in marriage, by Swedenborg, written in 1768. The introduction to this translation is quite beautiful; we want to get it translated into many languages, too. Here's a link to "Bračna Ljubav".

The Inner Meaning of the Prophets and Psalms - Latin text August 26, 2020:

Our Latin sweep continues with the posting of a revised text of "Summaria Expositio Sensus Interni Librorum Propheticorum Verbi Veteris Testamenti, Necnon Et Psalmorum Davidis". In this 1761 work, Emanuel Swedenborg outlined the internal meaning of the Prophetical Books from Isaiah to Malachi, the Psalms, and the first 16 chapters of Genesis. This work was not published by Swedenborg, but it is largely consistent with other more detailed treatments made in his published works. Here's a link to it.

We just imported another Swedish translation, "Levernes-lära för Nya Jerusalem". It's one of four short works by Swedenborg in 1763 that focus on what the Bible says about Life, Faith, the Lord, and the Sacred Scripture. In English, the title is, "Doctrine of Life for the New Jerusalem". It's a translation by C. J. N. Manby from 1918, and it's online and hyperlinked for the first time, a mere 102 years later! Here's a link to it, side by side with the original Latin text.

Every time we mark up and import a translation of "Arcana Coelestia" in a new language, it's a big milestone. And... now we have just posted a German one! It's an update of the 1867 Basel edition (J.F.I. Tafel's translation), edited by Dr. Friedemann Horn, and published by Swedenborg Verlag in Zurich, in 1998.

We've started posting chapter-level commentaries on the inner meaning of the Psalms. They're coming in batches. We have them for Psalms 1-8, and 26-29 so far. Here's a link to Psalm 5 with its commentary.

We are really pleased to offer "Doctrine about Faith", or 第四部信仰についての新エルサレムの教義 in Japanese.

One of our big initiatives is to get translations of Swedenborg's Bible explanations online in all the major languages. It's a years-long project... working with translators worldwide. Here's another step forward: "Enthüllte Offenbarung", which is German for "Apocalypse Revealed". It's pretty clear that the events that John saw and described in the Book of Revelation are spiritual events. This book will help you see how they can apply to our own spiritual lives, today. (If you don't read German, we have other translations!)

Here's the most recent translation from the farflung network of Spanish-speaking New Christian translators. In this short work, Bible readers get a well-structured explanation of how God reveals truths to us via the written Word, and how the Old and New Testaments are written by means of correspondences. Here's a link.

We've been bringing you installments of the new Dutch translation of Arcana Coelestia. Here's the latest: explanations of the meanings of Exodus chapters 1-20. Here's a link: Hemelse Verborgenheden in Genesis en Exodus.