The Battle of Jericho

This video is a product of the New Christian Bible Study Corporation. Follow this link for more information and more explanations - text, pictures, audio files, and videos: www.newchristianbiblestudy.org 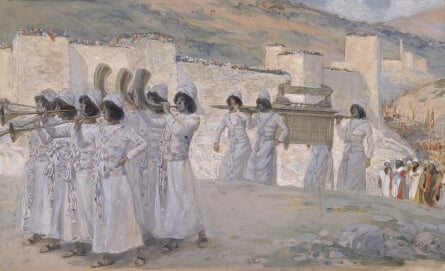 The Battle of Jericho is a great story... and a horrifying one. Why would God want children to be slaughtered? The answer is that He didn't, but did have spiritual lessons to teach us.

First, it's important to be reminded that all places in the land of Canaan signified celestial and spiritual things about the church. These significations were present from the most ancient times.

The sons of Israel were to represent the church. The Word - the Old Testament - was written and preserved by them. In it, the places that are mentioned signify things about heaven and the church

Right before coming to Jericho, the Children of Israel crossed the Jordan River - crossing on dry land as the waters divided for them. The Jordan symbolizes our introduction into the church.

The city of Jericho, near the river, signifies instruction in the knowledges of good and truth. That kind of instruction introduces people into the church. Extending that, "Jericho" also stood for the good of life, because there has to be some initial good - some wanting to learn - before one can be instructed.

However, at the time, idolatrous nations lived in the land of Canaan, which changes the signification of the places and cities in that land into the opposite, i.e. with Jericho then signifying the profanation of truth and good.

The Writings tell us that the "city" signified the doctrine of falsity and evil, which perverted and profaned the truths and goods of the church, and its "wall" signified falsities of evil defending that doctrine. In the story, the "inhabitants" represent those who are profane.

What does profane mean in this context? Profaneness is what happens when - after an initial acknowledgment of truth and good, a person's evil loves corrupt that good and truth. In the story, Jericho was burned with fire, its wall fell down, and its people were cursed. ("Fire" here signifies infernal love, "curse" a total blotting out, and "the falling down of the wall" exposure to every evil and falsity.)

The Children of Israel marched around the city once a day for 6 days, and on the 7th day, marched around it 7 times. At the Lord's commandment, they then sounded their trumpets, and shouted, and the walls fell.

Compassing the city, carrying the Ark of the Covenant, signified a survey of falsity and evil and their dispersion by the influx of Divine truth from the Lord.

The sounding of the trumpets by the priests signified the proclamation of Divine truth from Divine good. The shouting of the people signified consent and confirmation of the truth.

The number seven means holiness. There were 7 priests, 7 trumpets, 7 days, and 7 circuits of the city. They signify the proclamation of Divine truth.

In the profane hands of the idolaters of Jericho, the knowledges were profaned, becoming tools to serve direful falsities and evils. In the house of Jehovah, they could be serviceable knowledges, applied to good ends - hence their being salvaged.