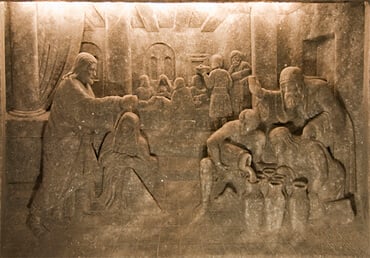 "Mother" represents the Lord's church in this world, and in some cases specifically the true ideas held by that church. "Servants" represent our externals: the way we act, what we actually do, and the shallow thoughts that concern those actions.

This is a remarkable verse in a way, then. The Jewish church – which had been the Lord's church in the world – was one that existed completely in externals. It called on its people to follow myriad rules and rituals with no idea that those rules and rituals had any symbolic spiritual meaning, and enforced those external acts fiercely. In this instance, however, we see Mary – representing that church, and the truth that did exist there – committing its externals to the leading of the Lord.

Water, as we will soon see, represents natural truth, or true ideas about external things. Wine represents interior or spiritual truth. The story is about turning the "water" of the Jewish church into the "wine" of the Christian church. But the Lord could not have turned water into wine unless the servants had brought water in the first place. He needed the externals of the Jewish church to provide external forms of truth.