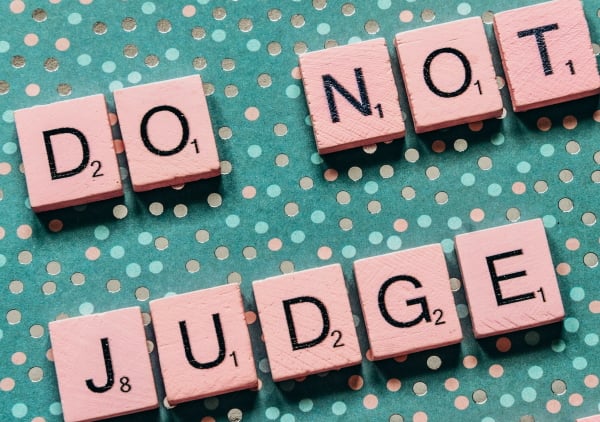 “Judge not that ye be not judged.” It can feel good and righteous to use that verse, right? And make sure to say “ye” so that it sounds even more authoritative. It can stop any judgers in their tracks.

This verse may be one of the best-known sentences of scripture, and may also be the most used by both Christians and non-Christians alike.

People don’t seem to like to be judged, do they? They don’t like it when their mistakes are pointed out. It’s possible they might feel evil, or stupid, or despised when they are judged.

They say things like “What right do you have to judge me?”

And that’s a good question: what right DO we have to judge another person? If we see a neighbor doing something wrong, are we allowed to judge them? If they say something horrible, can we judge them based on what we hear? Well, maybe we ought to take a solid look at what the Lord tells us about judgment? Then we’ll know if it’s really ok to judge or not.

In the story of David’s anointing, the Lord disagreed with Samuel when he thought that Jesse’s first son would make a good king:

“Do not look on his appearance or on the height of his stature, because I have rejected him. For the Lord sees not as man sees: man looks on the outward appearance, but the Lord looks on the heart” (1 Samuel 16:7)

In the Lord’s Word, height is a symbol for goodness. With this reference to height in today’s story, though, Jehovah says that man looks on the outward appearance. Thus, the height, or goodness that WE look at, is simply the goodness that we observe with our eyes and ears. We see what people do and hear what they say, and that is how we judge. EVEN if we judge people’s actions and words based on what the Lord tells us in the Bible, we are still only judging the outward appearance.
Judging by appearance will eventually result in errors in judgment. The Lord, though, can see what we cannot — the intentions of a person’s heart. Even if somebody were to say, “These are the intentions of my heart”, we still can’t really know.

So, what are some other things the Lord says about not judging?

Let’s take a look at Matthew 7:1-3 with the verses that begin “judge not”:

“Judge not, that you be not judged. For with what judgment you judge, you will be judged; and with the measure you use, it will be measured back to you. And why do you look at the speck in your brother’s eye, but do not consider the plank in your own eye? Or how can you say to your brother, ‘Let me remove the speck from your eye’; and look, a plank is in your own eye?”

These words of the Lord are pretty clear that we ought not to judge. And if we do judge, then we also will be judged in the same way. The words are reminiscent of the Lord’s prayer that says, “forgive us our debts as we also forgive our debtors”, but here it would be more like “Judge us not as we also judge not others.” As the verses continue, we learn the reason that we should not be judgmental: it’s because we have a plank in our eye so that we lack the keen sight that is necessary to judge.

You see, wood is a symbol for the good things we do. The eye is a symbol for our ability to understand true ideas. So, a piece of wood in the eye depicts a situation in which our external good inhibits our understanding in some way, or, in other words, our basic everyday good actions become a reason to not make an effort to understand more.

Imagine any number of real-life examples in which there is one person who commits greater acts of kindness than their neighbor, and so they feel self-righteously justified in judging said neighbor. I say “any number of real-life examples” because the average person — and maybe even the above average person — probably does this every day. We do something good, and we notice that somebody else is doing less good, and then we think it is our place to try to correct them … or judge.

“Judge not” … Our English word judge doesn’t really do the Greek justice, here. In English, the word judge can simply mean to discern or distinguish between right or wrong. The Greek word, though, has more than just a dash of condemnation thrown in. A somewhat clearer understanding of “judge not” then, would be that we are not to judge our neighbor in a condemning way. Remember what He said to the crowd: “He among you who is without sin may cast the first stone.” The stone in this case is a true idea that is intended to destroy, not help. The Lord’s point is that we are never qualified to use truth in a condemning way.

After all, judgment is reserved for the Lord, right? Isn’t He the only one that can judge? Isn’t the final decision about who goes to heaven or hell up to Him? Let’s see what HE says about it.

In Luke -- Someone in the crowd said to Jesus, “Teacher, tell my brother to divide the inheritance with me.” But He said to him, “Man, who made me a judge or arbitrator over you?” (Luke 12:13-14)

The Lord, here, seems to be denying that He is a Judge. Well, maybe He just means in natural things. Let’s read some more. Let’s read from New Christian teachings this time.

In Doctrine of the Sacred Scripture -- "The Lord alone, who is omniscient and knows the hearts of all, will sit in judgment, and is able to judge...."

There it is. In black and white. The Lord will sit in judgment. Oh, wait... it seems to continue.

"...and that His twelve disciples mean the church as to all the truths and goods it possesses from the Lord through the Word; from which doctrine concludes that these truths will judge everyone." (Doctrine of the Sacred Scripture 51)

Oh, wait. I see. It’s saying that the truths will judge everyone.

Hmmm... let’s read a little bit more from the gospels:

"If anyone hears my words and does not keep them, I do not judge him; for I did not come to judge the world but to save the world. The one who rejects me and does not receive my words has a judge; the word that I have spoken will judge him on the last day." (John 12:46-48)

Yeah, the Lord tells us in the gospels, and we can see it in New Church teachings as well. It seems that the “judge” is the Lord’s truth. How does that work then? How does the Lord not judge, but His truth judges?

In the book Heaven and Hell, we read -- The Lord does not throw anyone into hell. We throw ourselves in, not only while we are living in this world but after death as well, when we arrive among spirits. (Heaven and Hell 548)

So, what happens is this: we actually hold our hearts and beliefs up to the truth, and if we like the truth, then we choose heaven. If we don’t like it, then we run away from it into hells of our own making. Evil people can’t stand the light of heaven because it shines into their hearts and shows them — and everyone — who they truly are. By keeping away from the light of truth, they can live in a fantasy that they are the greatest.

When the Lord says, “how can you say to your brother, ‘let me remove the speck that is in your eye,’ when you yourself do not see the plank that is in your own eye?” we learn that we should not be hypocritical and self-righteous. We feel or pretend that we have authority to point out the faults in others just because we do some good works. But the plank in our eye means that our good works are just blinding us.
When the Lord told Samuel, “the Lord sees not as man sees: man looks on the outward appearance, but the Lord looks on the heart”, He is teaching us that we cannot make spiritual judgments about somebody’s intentions or the desires that are in their heart.

In order to make spiritual progress, we must first stop doing something wrong and then we can do something right.

First shun evils, then do good. There are harmful ways to judge, and we need to stop doing them. There is nothing useful that comes from it, and it’s harmful to yourself and the person you are judging.

And... there are helpful ways to judge, too. See here for an article on how to judge rightly.