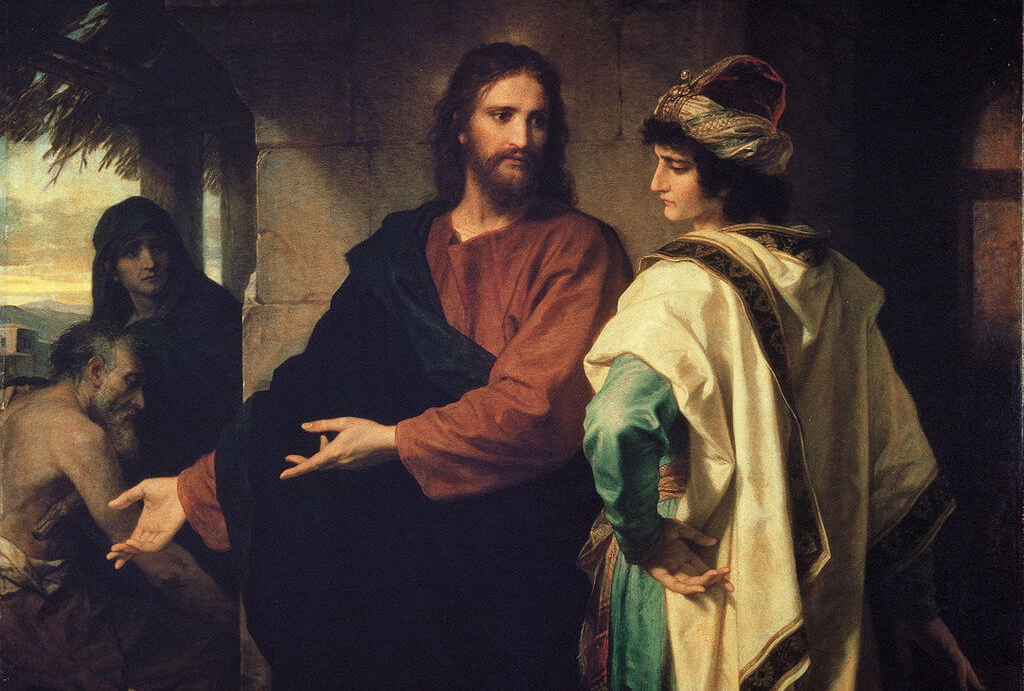 We're smart, talented, inventive, productive, and capable of spiritual awareness. Is there a reason for that? Or no reason? Are we, as Bertrand Russell said, just "accidental collocations of atoms"?

We think that the "yes, there is a reason" argument makes more sense. There seems to be a purpose -- a will -- that drives the development of life. And intelligence. This positive force apparently out-powers the entropy that you would expect in a nothing-but-physical universe.

The New Christian take is that this positive, creative force stems from the nature of God. Think of God as love itself -- this intense, inexhaustible well of love -- shaped and instantiated by infinite wisdom. That sort of love would long for conjunction -- for making others happy, and for creating this reciprocal circuit of love and response. That sort of wisdom would enable the creation of a multi-faceted universe where such a reciprocation could thrive.

Right now, we're living in one of the facets of this universe -- the physical one. It's a sort of substrate, a grounding-out place, where free, rational human beings can develop and live, and have a chance to achieve spiritual development. There's a spiritual facet to the universe, too - another plane just as real as the physical one - where free rational human beings can keep on living after their physical bodies die.

If that's the case, what are we supposed to be doing? Essentially, our quest here on earth is to make an overall choice whether to go for spiritual freedom, with God's help, or whether to reject his leading, and go our own way, which ends up with us becoming enslaved by our own evil loves. That big overall choice gets built up from thousands of everyday choices.

For reference, among many places where Bible supports the idea of heaven and eternal life, here are some examples:

Jesus said, "In my Father's house are many mansions; if it were not so, I would have told you; for I go to prepare a place for you." (John 14:2)

In this way, therefore, you should pray: Our Father, who art in the heavens, hallowed be Thy name; (Matthew 6:9)

"And he said unto them, 'Verily I say unto you, There is no man that hath left house, or wife, or brethren, or parents, or children, for the kingdom of God's sake, who shall not receive manifold more in this time, and in the world to come eternal life.' " (Luke 18:29-30).

This video is a product of the New Christian Bible Study Corporation. Follow this link for more information and more explanations - text, pictures, audio files, and videos: www.newchristianbiblestudy.org

2 In my Father's house are many mansionsmansions: if it were not so, I would have told you. I gogo to prepareprepare a place for you.

Explaining the Inner Meaning of John 14

Verse 14:1. The Word teaches, that man ought to look inwards towards the Lord in his Divine Humanity, for a refuge against evils.

Verse 14:2. And to believe that heaven is distinguished into in numerable societies, according to all the discriminations of good and truth, and that every one has a place there, according to the conjunction of those principles in his mind and life.

Verse 14:3. And to believe further, that according to the conjunction of those principles in the mind and life, every man has eternal conjunction of life with the Lord himself.

Verses 14:4, 5. Because according to the conjunction of those principles, every one has knowledge concerning the glorification of the Lord's humanity, and the process by which it was effected, although this knowledge seems to be concealed from him.

Verse 14:6. For in that glorification, and the process by which it was effected, is contained the all of doctrine, together with its truth and life, by which alone introduction is given to the supreme good.

Verse 14:7. Consequently the knowledge of the Lord in His Divine Humanity involves in it the knowledge of his essential divinity, and therefore faith in the visible humanity renders the divinity visible at the same time.

Verse 14:8. This reasoning however seems obscure to those in the church, who are principled in the intelligence of truth, and therefore they seek further instruction concerning the hidden divinity.

Verses 14:9, 10, 11. And are further taught, that whoever had faith in the visible Divine Humanity, has faith also in the invisible Divinity, since the Divinity and Humanity are mutually and reciprocally united, like soul and body, so that the humanity both thinks and operates from the divinity which is one with it.

Verse 14:12. Whosoever also has faith in the visible Divine Humanity, operates not only from truth in the understanding, but from the good of love and charity in the will, through the power supplied from that humanity made divine.

Verses 14:13, 14. And thus, inasmuch as he addresses himself immediately to the Lord in His Divine Humanity, all His prayers are granted, because the divinity is one with that humanity.

Verses 14:15, 16, and part of 17. He is also instructed that to love the Lord is to live according to His divine precepts, in which case the Lord in His Divine Humanity imparts all heavenly good and truth, and this to eternity.

Verses 14:19, 20. So that whereas they, who are in evil, have no faith in the Lord, they on the other hand, who are principled in faith and love, enjoy his continual presence, as a fountain of truth in their understandings, and of heavenly love in their wills, and thus have reciprocal conjunction of life with Him.

Verses 14:21, 22, 23, 24. For to love the Lord is to live according to His precepts, and they who so love are loved in return by the Lord, who dwells in His own Word in the interiors of such, and thus makes them the everlasting habitations of His truth and love.

Verses 14:25, 26, 27. Instructing them first by the letter of His Word, and afterwards by its spirit, or spiritual sense, in which is contained the all of truth and good, thus the all of internal peace, by which power is given over all spiritual temptations.

Verses 14:28, 29. And instructing them further, that true charity rejoices in the idea of the Lord's glorification, or of the union of divine truth with divine good, since truth derives from good all that it has, or is, and all proper faith results from the accomplishment of their predicted union.

Verses 14:30, 31. Nevertheless the union cannot be accomplished without temptation combats arising from the powers of darkness, by virtue of which the divine love of the Lord is manifested in all its fullness and purity, calling mankind to elevation of their affections by departing from all contrary love.

Is There Life After Death?

The Lord Jesus Christ and His Apostles

046 - Life after Death: Reincarnation vs. Rapture vs. Reality

094 - Did Jesus Say, "Today You Will Be Unconscious with Me in Limbo"?

135 - Miracles of the Old and New Testaments

139 - Why All the Building Projects in Scripture?

The Length of a Person's Life

The Purpose of the Advent

go
In the physical world, the places we inhabit and the distances between them are physical realities, and we have to get our physical bodies through...

prepare
In general, when something is "prepared" in the Bible it means that it is in the proper spiritual order, which happens when our hearts and...

Videos from the Swedenborg Foundation

Can You Dwell in the House of the Lord?

The Bible talks about dwelling in “the house of the Lord.” But what does that really mean?

How to Get a Home in Heaven - Swedenborg & Life

What are the houses like in heaven? And how do we get one? We explore the spiritual living conditions of the afterlife and how we can work on our heaven house right now.

Homes That Angels Live In
A lesson for younger children with discussion ideas and a project.
Sunday School Lesson | Ages 4 - 6

How to Love the Lord
It is by keeping the commandments that people can truly love the Lord.
Worship Talk | Ages 7 - 14

Imagine the Lord's Joy!
Picture the Lord's joy each time we take a step toward heaven.
Activity | Ages over 15

Inspirational Quotation - My Peace I Give to You
Small poster illustration a quotation from the Word.
Picture | Ages over 8

Let Not Your Heart Be Troubled
Easter is a time of rejoicing. On that day the Lord conquered death and rose in His Divine majesty and glory. It is a time for the renewal of our own faith in the life after death.
Worship Talk | Ages 15 - 17

Quotes: The Lord Our God
Teaching Support | Ages over 15

Quotes: The Word of God
Teaching Support | Ages over 15

The God We Worship
Worship Talk | Ages over 18

The Lord’s Rod and Staff
This family talk explains what the Lord's rod and staff are in our lives, and how He uses them to comfort us.
Worship Talk | Ages 7 - 14

The Way, the Truth, the Life
Jesus' discourse on the way, the truth and the life is the first part of a farewell address to His disciples in which He charges them to believe in Him and keep His commandments.
Sunday School Lesson | Ages 11 - 17