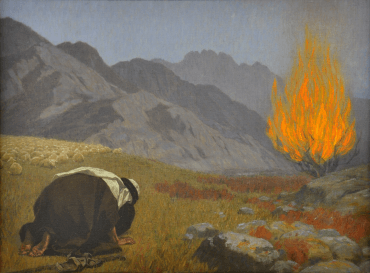 In the Old Testament, Jehovah -- once -- calls Himself "I AM". In Hebrew, the word is אֶהְיֶה , which has the meaning of "being", or "coming into being". This naming occurs in Exodus, when God appears to Moses in a burning bush, in the wilderness of Mount Horeb. It is one of the main spiritual turning points in the Bible, and the source of one of its deepest statements about God.

The descendants of Abraham, Isaac, and Jacob were now slaves in Egypt. They were numerous, but their connection with their forebears and with the land of Canaan was tenuous. The Pharaoh of that time "knew not Joseph". Their spiritual progress had stalled out.

Jehovah chooses Moses, herding sheep in the desert, to go back to Egypt and lead his people to freedom.

"I AM". It goes right to the very core of existence. Bigger than space, beyond time, uncreated.

Then, after many hundreds of years, with some people in Judea and its environs still waiting for the promised Messiah, Jesus says the same thing. People sit up and take notice.

When the disciples are in a storm-wracked sea in a small boat, Jesus comes to them, walking on the water:

"But straightway Jesus spoke to them, saying, 'Have confidence; I am; be not afraid'." Matthew 14:27

In the Gospel of John, there are several of these statements:

When Jesus talks to the Samaritan woman at the well:

The woman says to Him, "I know that Messiah comes, who is called Christ; when He has come, He will announce to us all things." Jesus says to her, "I am, who speaks to thee." John 4:25, 26

Then we find this conversation between Jesus and his disciples:

Later, in the same chapter, Jesus said to the disciples,

In chapter 13, again, Jesus is talking with the disciples at the Last Supper:

Finally, when Jesus is being arrested, there's this powerful scene:

"Judas then, having received a band of soldiers and attendants from the chief priests and Pharisees, comes thither with lanterns, and lamps, and weapons. Jesus, therefore, knowing all things that were coming on Him, went out and said to them, Whom do you seek? They answered Him, Jesus of Nazareth. Jesus says to them, 'I am'.

And Judas also, who betrayed Him, stood with them. When therefore He had said to them, I am, they went away backward, and fell on the ground. Again, therefore, He asked them, Whom do you seek? And they said, Jesus of Nazareth. Jesus answered, I told you that I am; if then you seek Me, let these go away, that the word which He said might be fulfilled, Of those whom Thou gavest Me I have lost none. John 18:3-9

These "I am" statements by Jesus are not the seven "I am" statements that are often listed; those are also very interesting, but on a different track. The ones listed above are places where Jesus is declaring that He is God, that he is "I AM".

This is hugely important. Isaiah prophesied that the Christ child would be God Himself, in human form:

"For unto us a child is born, unto us a son is given: and the government shall be upon his shoulder: and his name shall be called Wonderful, Counseller, The mighty God, The everlasting Father, The Prince of Peace." Isaiah 9:6.

Jesus is saying the same thing. Internally, he is "I am". As he gradually puts off or purifies his more external human elements, the internal shines through more and more.

19 Now I telltell you before it come, that, when it is come to pass, ye may believebelieve that I am he.

Explaining the Inner Meaning of John 13

Verses 13:1, 2. That previous to the glorification of the Lord's humanity, perception is given to him of the approaching event, together with unabated love towards his church, on which occasion infernal hatred is the more excited against him.

Verse 13:3. But perception is given to the humanity, that all things of divinity are appropriated to it, since it was assumed by the divinity, and united itself with the divinity.

Verses 13:4, 5. Therefore being elevated by this perception, and having provided an order of truth adapted to the natural principle of the church, the Lord in his humanity is intent on purifying that principle from the defilements of evil.

Verses 13:6, 7, 8. But they, who are principled in the truths of faith, are not aware of the necessity of such purification, until they are instructed, that they cannot otherwise be purified to eternity, and that all purification comes from the Lord alone in his Divine Humanity.

Verses latter part of 10, 11. Nevertheless, notwithstanding the purification which the Lord, in his Divine Humanity, is ever intent on accomplishing in his church, there are some who still remain in their natural defilements, and this is perceived by the Lord.

Verses 13:12, 13, 14, 15. Who therefore inculcates the necessity of enquiring into the nature of spiritual purification, until it be seen that if he, who is the divine source of all truth and good, is interested in the purification of man, and is continually operative to effect it, man himself ought also to be interested in, and intent on effecting it in like manner, both in respect to himself and others.

Verses 13:16, 17. Otherwise he inverts all divine order, by setting himself above the Lord, and his own wisdom above the divine wisdom, whereas his happiness consists in practising those precepts which he has received from the Lord.

Verse 13:18. Yet all do not so practise, and therefore are not accepted, agreeable to what had been predicted, namely that the natural man, although instructed in the knowledge of truth, would exalt himself above the spiritual man, and thus above the Lord.

Verse 13:21. Still the Lord, as to his humanity, is grieved at the thought, that he will be rejected even by those who are instructed in the knowledge of the truth.

Verses 13:22, 23, 24, 25, 26, and former part of 27. But they, who are so instructed, cannot comprehend how this should be, and therefore they seek information on the subject, first from principles of faith, and next from principles of love, and are thereby taught, that the Lord will be rejected by all those, who receive the knowledge of truth, and afterwards profane it through infernal love, since where this is the case, man enters into consociation with the powers of darkness.

Verses latter part of 13:27, 28, 29, 30. Which rejection of the Lord is required to be full and entire; but the reason of this is not seen by those who have received instruction in truth, until the rejection takes place, and the church comes to its end.

Verses 13:31, 32. On which occasion they are instructed, that all opposition of evil men and of evil spirits, in their rejection of the Lord, when he was here on earth, tended only to unite more fully his divinity with his humanity, and his humanity with his divinity, mutually and reciprocally.

Verse 13:33. They are instructed yet further, that the infirm humanity must, by such union, be entirely put off, and that in such case the Divine Humanity will be an object of speculation with those who are principled in truth, but not an object of love.

Verses 13:34, 35. Until to faith they join charity, and until charity be grounded in the divine love, which is the sure mark and character of a right faith.

Verse 13:36. Hence enquiry is made, by those who are principled in faith, concerning the Lord's glorification, and they are instructed, that they cannot comprehend it so long as they remain in faith alone, but will comprehend it when they conjoin faith with charity.

Verses 13:37, 38. Enquiry is further made, why they cannot comprehend it so long as they remain in faith alone, and again they are instructed, that at the end of the church there is no faith in the Lord, because there is no charity.

tell
'To tell' signifies perceiving, because in the spiritual world, or in heaven, they do not need to tell what they think because they communicate every...

believe
The meaning of "believe" in the Bible is pretty straightforward, but runs deeper than what appears on the surface. When in the Old Testament people...

Blessings: Being a Good Neighbor
Blessings to say at mealtime.
Activity | Ages over 7

Disciples of the Lord Bookmarks
Here are bookmarks that you can print, cut out, and use to help you remember some of the keys to becoming a disciple of the Lord.
Project | Ages over 7

For Reflection: "Love One Another as I Have Loved You"
A great activity to help us reflect on the nature of the Lord's amazing love for all people and how we can receive that love and live from it in relating to others.
Activity | Ages over 15

Jesus Washes the Disciples' Feet
In washing the disciples' feet Jesus showed His unconditional love for humankind. His example shows us leadership qualities to strive for.
Sunday School Lesson | Ages 11 - 17

Prayers for Adults: Dealing with Other People with True Charity
Activity | Ages over 18

Prayers for Adults: Loving the Neighbor
Activity | Ages over 18

Why Be Religious? For the Sake of True Married Love
Article | Ages over 15