14 ThreeThree times thou shalt keep a feast unto me in the year.

17 ThreeThree times in the year all thy males shall appear beforebefore the Lordthe Lord GOD.

19 The firstfirst of the firstfruits of thy land thou shalt bringbring into the house of thehouse of the LORDLORD thy GodGod. Thou shalt not seetheseethe a kidkid in his mother'smother's milkmilk. 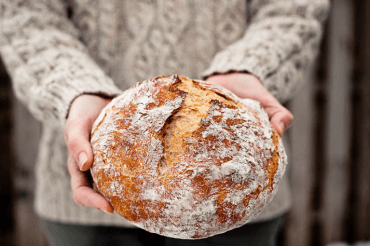 The Children of Israel were told to keep three feasts each year - the feast of unleavened bread, the feast of first fruits, and the feast of ingathering. Should we still do that?

In Exodus 23:14-16, Moses receives the instructions about these feasts. Those three verses in Exodus comprise our brief story. Their inner meaning is explained in Arcana Coelestia 9286-9296.

There are three feasts. In the Word, the number three represents a completeness, a sense of things being covered from beginning to end. Our thankfulness to the Lord is supposed to keep going - to endure.

The first feast, of unleavened bread, stands for worship, for our thankfulness for the Lord's action in our minds to get rid of false ideas. That enables us to start to receive good loves.

The second feast, of first fruits, relates to the planting of true ideas in that "soil" of initial loves for doing good.

The third feast, of harvest, or ingathering, stands for the time when, by applying our true ideas, we receive real good - loves of the neighbor and of the Lord - that become the middle of our lives. This is the state of rebirth, where we have - by working through the year (our lives), and enduring in thankfulness, allowed the Lord to get rid of our false ideas, and push our evil loves to the periphery, so that good can work, and be fruitful.

These feasts, then, represent the progress of our spiritual lives. In some manner, we need to keep them.

2405. That 'as dawn ascended' means when the Lord's kingdom draws near is clear from the meaning of 'the dawn' or morning in the Word. Since the subject in this chapter is the successive states of a Church, what happened in the evening, then what happened during the night have been referred to first. What took place when it was twilight comes now, and further on what took place after sunrise. Twilight is expressed here by 'as dawn ascended', which means the time when the upright are separated from the evil. This separation is described in the present verse to verse 22 as Lot being brought out together with his wife and daughters and being saved. The fact that separation takes place prior to judgement is clear from the Lord's words in Matthew,

Before Him will be gathered all the nations, and He will separate them one from another as a shepherd separates the sheep from the goats. Matthew 25:32.


[2] In the Word that period of time or state is called 'the dawn' because that is when the Lord comes, or what amounts to the same, when His kingdom draws near. It is similar with the good, for at that time something akin to early morning twilight or the dawn shines with them. This explains why in the Word the Lord's coming is compared to and also called 'the morning'. Its comparison to the morning is seen in Hosea,

Jehovah will revive us after two days, on the third day He will raise us up, and we shall live before Him. And we shall know, and we shall press on to know Jehovah. As the dawn is His going forth. Hosea 6:2-3.

'Two days' stands for the period of time and the state which precedes. 'Third day' stands for judgement or the Lord's coming, and so for the approach of His kingdom, 720, 901 - a coming or approach which is compared to 'the dawn'.

The God of Israel is like morning light, [when] the sun rises on a cloudless morning; from brightness, from rain, grass comes out of the earth. 2 Samuel 23:4.

'The God of Israel' stands for the Lord, for no other God of Israel was meant in that Church, where every single feature of that Church was representative of Him. In Joel,

The day of Jehovah is coming, for it is near, a day of darkness and thick darkness, a day of cloud and gloom, like the dawn spread over the mountains. Joel 2:1-2.

This too refers to the Lord's coming and His kingdom. The words 'a day of darkness and thick darkness' are used because at that time the good are separated from the evil, as Lot was here from the men of Sodom; and after the good have been separated the evil perish.

[4] The Lord's coming or the approach of His kingdom is not compared to the morning but actually called such, as in Daniel,

The Holy One said, For how long is the vision, the continual [burnt offering], and the desolating transgression? He said to me, Up to the evening [when it is becoming] morning two thousand three hundred times, and the Holy One will be justified. The vision of the evening and the morning which has been told is the truth. Daniel 8:13-14, 26.

'The morning' here clearly stands for the Lord's coming. In David,

Your people are free-will offerings, in the day of Your power, in the beauties of holiness, from the womb of the dawn You have the dew of Your nativity. Psalms 110:3.

The whole of this psalm refers to the Lord and His victories in temptations, which are meant by 'the day of power and the beauties of His holiness'. 'From the womb of the dawn' means Himself, thus the Divine Love from which He fought.

Jehovah is righteous in the midst of her. He will do no wrong. In the morning, in the morning He will bring His judgement to light. Zephaniah 3:5.


[6] Since 'the morning' meant these things, Aaron and his sons, to provide the same representation, were commanded to set up a lamp and tend it from evening till morning before Jehovah, Exodus 27:21. The 'evening' referred to here is the twilight prior to morning, 2323. For a similar reason it was commanded that the fire on the altar was to be rekindled every dawn, Leviticus 6:12; also that none of the paschal lamb and the consecrated elements of sacrifices were to remain until the morning, Exodus 12:10; 23:18; 34:25; Leviticus 22:29-30; Numbers 9:12 - by which was meant that when the Lord came sacrifices would come to an end.

[7] In a general sense 'morning' is used to describe both the time when dawn breaks and the time when the sun rises. 'morning' in this case stands for judgement in regard to the good as well as on the evil, as in the present chapter - 'The sun had gone forth over the earth and Lot came to Zoar; and Jehovah rained on Sodom and Gomorrah brimstone and fire', verses 23-24. It in like manner stands for judgement on the evil, in David,

In the mornings I will destroy all the wicked of the land, to cut off from the city of Jehovah all workers of iniquity. Psalms 101:8.

Let that man be like the cities which Jehovah overthrew, and He does not repent; and let him hear a cry in the morning. Jeremiah 20:16.


[8] Seeing that 'the morning' in the proper sense means the Lord, His coming, and so the approach of His kingdom, what else is meant by 'the morning' becomes clear, namely the rise of a new Church, for that Church is the Lord's kingdom on earth. That kingdom is meant both in a general and in a particular sense, and indeed in a specific sense, the general being when any Church on earth is established anew; the particular, when a person is being regenerated and becoming a new man, for the Lord's kingdom is in that case being established in him and he is becoming the Church; and the specific, as often as good flowing from love and faith is at work with him, for this is what constitutes the Lord's coming. Consequently the Lord's resurrection on the third morning, Mark 16:2, 9; Luke 24:1; John 20:1, embodies in the particular and the specific senses the truth that He rises daily, indeed every single moment, in the minds of regenerate persons.

Resurrection of the lord

The videos shown here are provided by our friends at Off The Left Eye, a project of the Swedenborg Foundation. You can find out more about them here: offthelefteye.com.

The Meaning of Easter - Swedenborg and Life

Easter represents Jesus’s Resurrection. It also represents the spiritual renewal going on inside of us all the time.