13 And it came to pass, when Joshua was by Jericho, that he lifted up his eyes and looked, and, behold, there stood a man over against him with his sword drawn in his hand: and Joshua went unto him, and said unto him, Art thou for us, or for our adversaries?

14 And he said, Nay; but as captain of the host of the LORD am I now come. And Joshua fell on his face to the earth, and did worship, and said unto him, What saith my lord unto his servant?

15 And the captain of the LORD's host said unto Joshua, Loose thy shoe from off thy foot; for the place whereon thou standest is holy. And Joshua did so.

Take off your shoes! 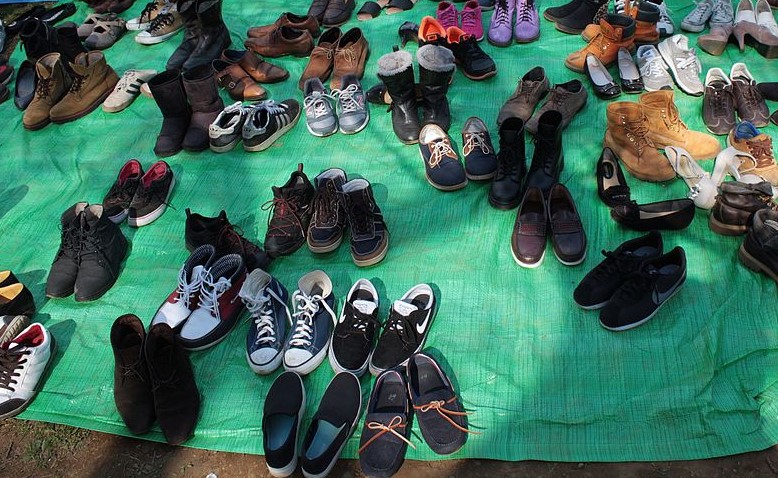 In this very brief story in the Book of Joshua, chapter 5, an angel appears to Joshua, near Jericho, and tells him to take off his shoes, for he is standing on holy ground.

There is a similar but better-known passage in the story of Moses and the Burning Bush, in Exodus 3:5, where Jehovah commands Moses to take off his shoes, again because he is on holy ground.

What do these stories mean?

In both stories, there is a warning. The angel who confronts Joshua does so with a drawn sword. In Exodus, there's a burning bush, and Jehovah warns Moses, "Do not draw near this place." These warnings mean that Moses and Joshua have to grow beyond thinking of the Divine from just a sensuous level. Instead, they need to start approaching the Divine with their more interior minds, through what they love and understand.

They are both told to take off their shoes. Why? Shoes represent the lowest, sensual part of our minds. That low, physically-oriented part of our mind can get in the way of our ability to elevate our minds and start to think clearly about spiritual things.

It's interesting. We need to be able to elevate our minds to be able to receive and think about spiritual truths, and we also need to live them out through our natural minds in the natural world. We have to get good at using this tension between elevation and grounding.

If we do make headway in our spiritual thinking, and in living out the truths we know, gradually our natural mind gets re-formed, too, so that it's capable of receiving influx from the Lord, too. Here are links to two of the key passages in Swedenborg's works that explain this further:

6844. Take off your shoes from upon your feet' means that the powers of the senses, which form the external levels of the natural, should be removed. This is clear from the meaning of 'shoes' as the powers of the senses forming the external levels of the natural, dealt with in 1748; and from the meaning of 'feet' as the natural, dealt with in 2162, 3147, 3761, 3986, 4280, 4938-4952. 'Taking off' plainly means removing since one is talking about the powers of the senses. Particular expressions have to be used in application to the actual matter to which they refer; thus 'being taken off' is applied to shoes, and 'being removed' to the powers of the senses. The implications of all this need to be stated. Anyone can see that here 'shoes' represent something that does not accord with Him who is holy and Divine, so that 'taking off one's shoes' was representative of the removal of things like that. Without this representation what would it matter to the Divine whether a person drew near in shoes or in bare feet, provided that inwardly he is the kind of person who can draw near the Divine in faith and love? Therefore the powers of the senses are meant by 'shoes', and those powers, which form the external levels of the natural, are by nature such that they cannot remain when one thinks with reverence about the Divine. Consequently because it was a time when representatives had to be observed, Moses was not allowed to draw near with his shoes on.

[2] The reason why the powers of the senses that form the external levels of the natural are by nature such that they cannot receive the Divine is that they are steeped in ideas of worldly, bodily, and also earthly things because they are the first to receive them. Therefore sensory impressions contained in the memory as a result of the activity of the senses draw their nature from the light and heat of the world, and hardly at all from the light and heat of heaven. As a consequence they are the last things that can be regenerated, that is, receive something of the light of heaven. This explains why, when a person is ruled by his senses and sensory impressions control his thinking, he inevitably thinks of the Divine as he does of earthly things. If also he is ruled by evil those impressions make him think in ways altogether contrary to the Divine. When therefore a person thinks about the kinds of things that have to do with faith and love to God he is raised, if he is governed by good, from the powers of the senses which form the external levels of the natural to more internal levels, consequently from earthly and worldly things nearer to celestial and spiritual ones.

[3] This is something people do not know about, the reason being that they do not know that internal levels distinct and separate from external ones are present within them, or that thought exists on increasingly internal levels as well as on more external ones. And unaware of these things a person cannot reflect on them. But see what has been stated already about thought ruled by sensory impressions:

A person may be raised above the level of the senses, and when he is raised he comes into a quite gentle light; and this happens especially to those who are being regenerated, 6183, 6313, 6315.