53 And came out of the gravesgraves after his resurrection, and went into the holy citycity, and appeared unto many.

The Veil was Torn in Two 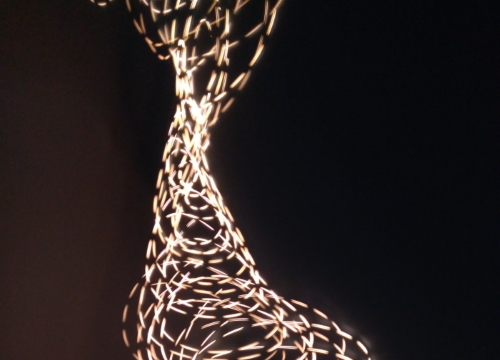 When Jesus died on the cross, there was an earthquake. Rocks were split. The centurion and his soldiers who had carried out the crucifixion orders were afraid.

In the heart of the temple, in the "holy of holies", in the very heart of Jerusalem, the sacred veil tore, from top to bottom.

The veils in the tabernacle and later in the temple were important. They're described in great detail in Exodus and in 1 Kings. In Arcana Coelestia 2576, it says that, "Rational truths are a kind of veil or clothing to spiritual truths.... The veil represented the nearest and inmost appearances of rational good and truth....

And now, as Jesus dies on the cross, the veil tears. What does this mean?

Here's how Swedenborg describes the symbolism of this:

4) The incarnation and resurrection of the Lord God Jesus Christ (2000 years ago).

God's love and wisdom have been flowing into the universe for a long time. Where you might expect entropy, instead we see a universe that seems to favor life and intelligence. Think what a fulfilling moment it must have been when God could tell that human minds were now responding to Him, after all that outpouring.

But the free response-ability has tragedy baked in, because we can also choose not to respond, and to go the opposite way.

As we humans grew more "sophisticated", God used new channels to reach us, notably prophets and spiritual leaders, and later the written word. And in those channels, from the earliest times, there are already prophecies that the Lord would one day come into the world in human form.

Why did He need to do that? He must have foreseen that people would need to have that human level of connection, in order for enough good and truth to exist for us to make the decisions that open us to salvation.

Let's go back to Swedenborg's description:

"... once all appearances had been dispelled the Lord entered into the Divine Itself..."

Throughout the Lord's life on earth, there was the appearance that he was a man, like us. He had a human body. He could be tired and hungry. He could be tempted (though unlike us, he always won). In his spiritual life, there were times when he felt keenly the appearance of his human separate from his Divine essence. At other times, that appearance thinned, and he felt his divinity more powerfully. As he grew up, and was baptized, and began his ministry, he must have been growing more and more fully aware of what was going on inside him -- the glorification of the human part of him. With the death of his body on the cross, the bodily human-ness was no longer in the way. That appearance was dispelled. A new connection was fully forged between the Divine and the human.

And then, there's the second part of Swedenborg's statement:

"at the same time He opened a means of access to the Divine Itself through His Human that had been made Divine."

The veil was torn. The old religion, which had placed ritual above real good, and where God was invisible, separated from human knowledge by a veil -- was torn. New light could reach people, through the new teachings of the Lord. We could respond to a God who, in His Divine Human, we now could understand and approach and love more deeply.