12 Jesus saithsaith unto them, Come and dine. And none of the disciplesdisciples durst ask him, Who art thou? knowing that it was the Lord.

The Breakfast by the Sea of Galilee 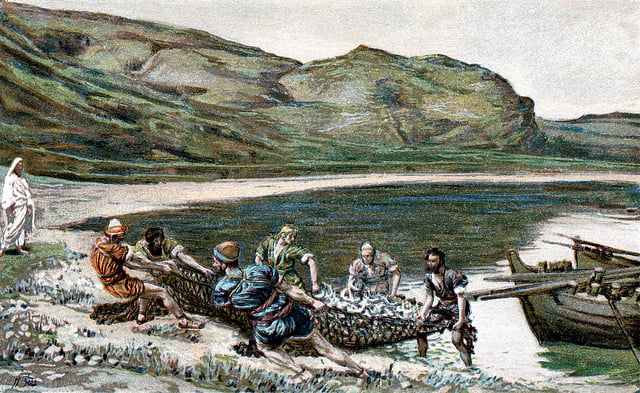 Near the end of the gospel of John, (in John 21:1-14), we find a story where, some days after Jesus' crucifixion and resurrection, seven of Jesus's disciples have travelled north from Jerusalem to the sea of Galilee. At Peter's suggestion they have all gone out in his boat to fish. They fish all night, but have no luck, and catch nothing. They are fairly close to the shore, and as the early morning light begins to grow they see a man standing by the water. He calls out to them, asking if they have caught anything. When they answer "no", he tells them, "try the other side of the boat". They give it a try. When they do, they catch so many fish that they can't haul the net into the boat; it's too heavy. So they row toward shore, dragging the net full of fish behind them.

As they're drawing closer to shore, they still haven't recognized that the man on the shore is Jesus. He has kindled a small, and is cooking fish. He invites them to have breakfast with Him, and at that point, John realizes that it is Jesus, and tells Peter. Peter grabs his cloak, belts it around himself to cover his nakedness, and jumps into the water to swim to shore.

This story has some interesting details to explore. The earlier stories of events that happened after the Lord's rising took place in or near Jerusalem, but this one is in Galilee. Five of these disciples are named, and at least four of the five were from Galilee, so they are at home. They were fishermen before Jesus called them to be disciples, so to go fishing is in their blood.

The five disciples named in the story are Simon (or Peter), the brothers James and John, Thomas, and Nathaniel. Two more who are not named, to make up the seven, and it would be reasonable to guess that they were Andrew, Peter's brother, and Philip, a friend of Nathaniel's - both of whom were also from Galilee.

The angels that Peter and John had seen at the sepulcher had told them that Jesus would meet them in Galilee on "the mountain". Perhaps these seven, being from Galilee, had hurried on ahead of the others.

Let's look at their names and see what the literal meaning is, and what they represent in a spiritual way.

- Simon was renamed by Jesus as ‘Peter', which in the Greek means a rock. In this case, the name means the firmest and most critical rock, or truth, of Christianity, i.e. that Jesus was from God.

- Nathaniel means a gift from God, and being a friend of Philip, I think it might be that the gift from God that he represents is the love of learning things that fill the understanding, our curiosity.

- Thomas, in Greek, means a twin, and since he is named right after Peter perhaps he has a similar representation. Peter believes in the Lord easily because of what he has seen and what the Lord has told him whereas Thomas believes, and believes just as strongly, but only after his doubts have been erased, after he has been shown.

The towns most mentioned in the stories that take place around the "Sea of Galilee" in the gospels are Bethsaida, Capernaum, Cana, and Nazareth. Bethsaida itself means "a place of fishing." The maps I have of the area are small scale and not all exactly the same, but the indication is that it is at the northern end of the lake or even on the upper Jordan river just before it runs into the lake. Capernaum and Magdala are on the northwestern shore and Cana and Nazareth are inland, but only four or five miles west of this corner of the lake. This area was where most of these disciples had been brought up, and fishing was a common occupation.

The name Galilee means "a circuit". The Word teaches us that Jesus taught in the towns all around the lake, so that a reading of all that Jesus taught and did in that country could be thought of as a "circuit" of His teachings.

The next detail of interest is that when the Lord suggests the other side of the boat and the result is a large catch of fish after a long night of nothing. This is reminiscent of the fishing incident given in Luke 5:4-7. Since the disciples are to become "fishers of men" (as in Matthew 4:19) and they are to persuade people into the knowledge and worship of the Lord, the Christ, it is perhaps a lesson that in their ministry they must always be guided by the Lord.

Then John realizes, and whispers to Peter, "it's the Lord" (John 21:7) and Peter quickly puts his cloak on and jumps in to get to shore faster. Why is it John that first realizes? John represents love and affection while Peter represents faith or truth. While truth is the means of acting, as Peter does, love is the means of connecting, which is what John did. And why did Peter need to grab his cloak and put it on? Clothing in the Word represents the truths about spiritual things that all people may have if they look for them. It is the particular truths that form Peter as a disciple, "Thou art the Christ" (Matthew 16:16-18) that he answers to the Lord, and this truth is the rock of the Christian church. Having this truth as part of himself is necessary to meet the Lord.

When they are all on shore, Jesus says to them to bring some of the fish they have caught, so Peter goes to the water and drags the full net up onto the sand and counts out the fish, one hundred and fifty three. Then Jesus invites them all to come and eat.

Now a strange comment is put into the story: "…none of the disciples durst ask him, 'who art thou?', knowing that it was the Lord." (John 21:12). It seems that they should have known. They had been following Him for several years. I wonder if this is a reminder that the Christian church has yet to understand the true reality of the Lord - was He God, or was He man? The Catholic church argued this for more than three hundred years, and the council that was supposed to decide came up with three separate persons, Father, Son, and Holy Spirit, all in one Godhead. Some of the Christian churches of today seem to focus on two, the Father, and a Son born from eternity, who apparently both rule together.

The New Christian Church understands that Jesus was born both God and man but that there was a slow but inevitable change going on during His lifetime. He was born with God, Jehovah, as His inmost, and a human heredity and body from Mary as a covering or cloak over this inmost. Mary was, you may recall, of the royal house of David, so her heredity was both strong and inclusive, and thus represented all that was connected to the Jewish form of worship. During Jesus' life (and starting early, though we don't know just how early), He put off things from Mary, and put on what was a corresponding Divine, from His inmost, in its place, until on Easter morning He was wholly divine, with all that came from His mother being dispersed and gone. There is only One God.

Why is it that in this little story the number of fishes that were caught in the net is mentioned, and why does it seem now so important that Peter took the time to count them as everyone waited? Something that has been revealed to the New Christian Church is that all the numbers used in the stories of the Word have a meaning that belongs to that number even outside the literal use in the story. The number 153 can be seen as the combination of 150 and 3, and both of these are strongly meaningful. Starting with the "three", there should be little doubt that it means something since it is used so often. Jesus rose on the third day. Also three is the number of things that, put together, make anything complete, the wish or desire to do it, the knowledge of how to do it, and the actual doing. This is true of any task - from baking a cake right up to the Lord's love, His wisdom, and His act put forth in creating the universe. One hundred and fifty is not so plain. I am aware of only two places it is used in the Word, and we are told that it means a total change, an ending of something and the beginning of something different. It is used here and in the story of the flood, at the end of Genesis 7 and in Genesis 8:3; "And the waters prevailed upon the earth an hundred and fifty days." "… And the waters returned from off the earth continually; and after the end of the one hundred and fifty days the waters were abated." The use here is that it means the end of the Church called "Adam" and the start of the church called "Noah" (See on this website "The Churches", and for the meaning, see Arcana Coelestia 812, 846). In the story we are considering it means the end of the Church called Israel and the start of the Christian church, though that is probably complete a day or two later when the Lord meets with all of His disciples on the mountain and sends them out to preach and heal.

This first part of this story ends with all of the seven disciples on the shore with Jesus, and His giving to them a breakfast of bread and roasted fish. With this giving, perhaps they all fully realized who He was, as with the two disciples at Emmaus. The Gospel comments, "This is now the third time that Jesus showed Himself to his disciples after that He was risen from the dead.