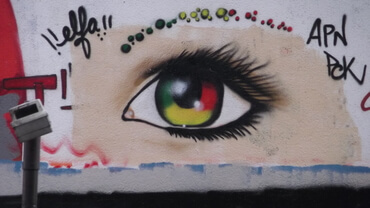 
[2] Let the following example show what is meant by external truths and the affections for them, and what by internal truths and the affections for these, and the fact that the former are 'weak eyed' in comparison with the latter, which are 'beautiful in form and appearance': Those governed by external truths know no more than the general truth that good should be done to the poor. They do not know how to tell who are truly the poor, let alone know that in the Word the expression 'the poor' is used to mean those who are so spiritually. Consequently they do good to bad persons and to good ones alike, without realizing that doing good to bad people is doing bad to good, for the bad are then given the opportunity to do bad to those who are good. This is why people possessing this kind of simple zeal are infested so strongly by the crafty and deceitful. But those governed by internal truths know who the poor are, tell one poor person from another, and do good to each according to his individual character.


[3] Take another example. Those governed by external truths know no more than the general truth that the neighbour ought to be loved. They as a consequence believe that every individual is the neighbour in the same degree, and so every individual ought to be embraced with the same love. Believing this, they allow themselves to be misguided. Those however who are governed by internal truths know which degree of the neighbour each person belongs to and that any one person is the neighbour in a different degree from another. Consequently they are aware of countless things which those governed by external truths do not know. They do not therefore allow themselves to be led astray by the mere name of neighbour, or to do what is evil by performing that good which the name alone persuades them to do.


[4] Take yet another example. Those governed by external truths alone imagine that the learned will shine like stars in the next life, and that all who have worked in the Lord's vineyard will have a greater reward than others. But those governed by internal truths know the expressions 'learned', 'wise', and 'intelligent' are used to mean those in whom good is present, whether they possess any human wisdom and intelligence or not, and that it is these who will shine like stars. They also know that those who work in the vineyard receive a reward, each according to the affection for good and truth which motivated him in his work, and that those who work from selfish and worldly motives, that is, from self-aggrandizement and enrichment as motives, have their reward during their lifetime, but in the next life their lot is with the evil there, Matthew 7:22-23.