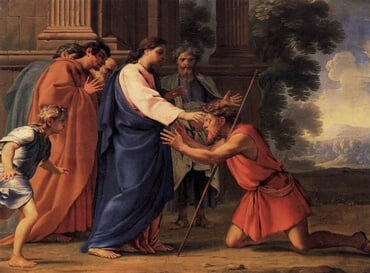 Three times, in the Gospel of John, Jesus tells people to ask for something "in My name". It sounds very much like he's thinking of intercession, i.e. that Jesus and "the Father" are separate people. But we know they aren't - they are one person. Still, those sayings are easy to misunderstand, and they've caused some confusion for Christians since pretty early on. Let's look closely at the Bible texts, to see if we can get a clearer picture, to understand what Jesus means.

In the Word, the name of someone symbolizes their true quality, or nature. Bear this in mind as you read this article; it will help!

First, here are the three "in-My-Name" passages from John:

You didn't choose me, but I chose you, and appointed you, that you should go and bear fruit, and that your fruit should remain; that whatever you will ask of the Father in my name, he may give it to you. (John 15:16)

"Therefore you now have sorrow, but I will see you again, and your heart will rejoice, and no one will take your joy away from you. In that day you will ask me no questions. Most certainly I tell you, whatever you may ask of the Father in my name, he will give it to you. Until now, you have asked nothing in my name. Ask, and you will receive, that your joy may be made full. I have spoken these things to you in parables. But the time is coming when I will no more speak to you in parables, but will tell you plainly about the Father. In that day you will ask in my name; and I don't say to you, that I will pray to the Father for you, for the Father himself loves you, because you have loved me, and have believed that I came forth from God. I came out from the Father, and have come into the world. Again, I leave the world, and go to the Father." (John 16:22-28)

These passages are largely parallel, but there are some interesting nuances. In John 14, Jesus says "that will I do". Not the father, there, in that instance. In John 15, Jesus says that the Father will satisfy requests made "in My name", and there, Jesus and the Father sound somewhat separate. Then, in John 16, again it is the Father granting requests. However, this time Jesus makes it clear that there will soon be no appearance of intercession. Instead, he's saying that things are changing. There's a hint that the currently apparent separateness is going to end, and that oneness is the future, actual, reality.

Taking these three excerpts together, it's easy to see why people could be confused, and why "in Jesus' name we pray" could have become a standard Christian formula. But, on careful reading, it's apparent that "in My Name" doesn't necessarily imply two people, as per John 14. What's more, the perceived separateness of "Father" and "Son" is temporary; it's about to change.

To get a broader context, here are some other places in the New Testament where the phrase "in My name" occurs. Matthew, Mark, and Luke all relate the story of the Lord's saying that we should receive little children "in My name". In two of these passages, there are hints of both separateness and oneness.

"Whoever receives one such little child in my name receives me, but whoever causes one of these little ones who believe in me to stumble, it would be better for him that a huge millstone should be hung around his neck, and that he should be sunk in the depths of the sea." (Matthew 18:5-6)

In this story, we're clearly told to protect innocence. There's still an allusion to separateness, though -- "him who sent me", but here's how we can see this: We can receive "little children" in the name of the Lord. Here, little children symbolize innocence. They're willing to be led by the Lord. If, as adults, we also cultivate that openness to the Lord's leading, then we can receive Divine Truth. With true ideas forming our minds, we can receive Divine Love, too.

In two other New Testament passages, doing something in the Lord's name conveys power, and here there's no mention of separateness:

John said to him, "Teacher, we saw someone who doesn't follow us casting out demons in your name; and we forbade him, because he doesn't follow us." But Jesus said, "Don't forbid him, for there is no one who will do a mighty work in my name, and be able quickly to speak evil of me. For whoever is not against us is on our side. For whoever will give you a cup of water to drink in my name, because you are Christ's, most certainly I tell you, he will in no way lose his reward." (Mark 9:38-41)

"These signs will accompany those who believe: in my name they will cast out demons; they will speak with new languages; they will take up serpents; and if they drink any deadly thing, it will in no way hurt them; they will lay hands on the sick, and they will recover." (Mark 16:17-18)

"For where two or three are gathered together in my name, there I am in the midst of them." (Matthew 18:20)

Working back into the Old Testament, we find the "in My name" phrase occurring there, too, but not as often.

In Deuteronomy, Jehovah says this:

"It shall happen, that whoever will not listen to my words which he shall speak in my name, I will require it of him." (Deuteronomy 18:19-20)

In Psalms, we find this instance:

But my faithfulness and my loving kindness will be with him. In my name, his horn will be exalted. (Psalm 89:24)

Let's go back to the initial question: what does Jesus mean when he tells us to ask "in His name"?

It doesn't mean that we're asking one person to intercede for us with another one, who might be a little harsher. It doesn't imply two people at all. It really means that we're asking the Lord for help by recognizing His true spiritual quality. Jesus is "the Word". He's Divine Truth, moved by love. To ask something in His Name is to approach the Lord from a perspective that is seeking truth, and that is both wise and loving.

28 And Thomas answeredanswered and saidsaid unto him, My Lord and my God.