What does the Bible say about Angels? 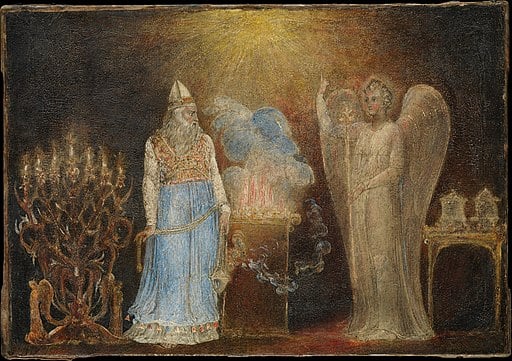 What IS an angel? Are they real? Let's see what the Bible says.

A quick search for the word "angel" in the Bible turns up 271 results. Here's a very quick sampling of them; not adequate, really, but interesting...

An angel calls Gideon to lead his people against the Midianites:

Judges 6:11: And the angel of Jehovah came and sat under the oak which was in Ophrah, that belonged to Joash, the Abiezrite; and his son Gideon was beating out wheat in the winepress to hide it from before Midian.

Hannah, Manoah, and the angel:

An angel measures the city:

Zechariah 2:1-3: And I lifted my eyes, and saw, and behold, a man, and in his hand a measuring cord. And I said, whither goest thou? And he said to me, To measure Jerusalem, to see what is her breadth, and what is her length. And behold, the angel who spoke with me went out, and another angel went out to meet him.

An angel prophecies the birth of John the Baptist:

Luke 1:11-18 And Zacharias said to the angel, Whereby shall I know this? For I am elderly, and my wife is far advanced in her days. And the angel answering said to him, I am Gabriel, who stands in the sight of God, and am sent to speak to thee, and to announce to thee these good tidings.

These are only four of those many search results, but from just these, we're seeing that angels are people, seeable by people whose spiritual eyes are opened. They talk, eat, hold measuring tapes, etc.

In the many more instances described in the Word, they hold swords or scrolls; the people who see them are often afraid until they are reassured. They are sometimes wreathed in light. In Revelation, an angel is seen flying. They bring messages -- sometimes good tidings of great joy. Mostly they seem to be masculine, though in many cases it's not specified. Some are named, e.g. Gabriel and Michael. Sometimes they are fierce and stern; other times, caring and nurturing, as when they take care of Jesus Christ during his temptations in the wilderness. Consistently, they are portrayed as people - because they are! They are people who have lived in the physical world, finished their lives here, and who are now living in the spiritual world -- and every now and again, someone's spiritual eyes are opened, and they can see angels.