Two Meetings in Jerusalem after the Resurrection 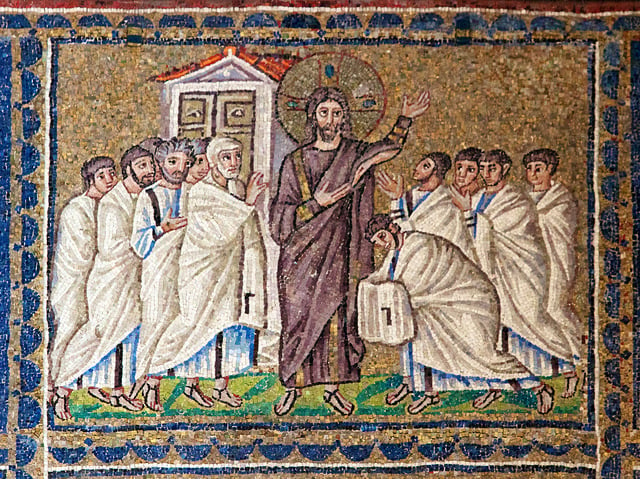 Late on the first Easter Sunday, after the Lord had risen from the sepulcher, ten of the disciples gathered for the evening in the upper room of a house in Jerusalem (John 20). They were afraid and probably confused. Since their leader had been crucified by the Roman power, as organized by their own Jewish leaders, they feared that now his followers might also be hunted down and punished. They closed and locked the doors. Were any of the women there? The story does not say, but Peter and John were, who saw and talked with the angels that morning, and the stories of the women were known. Some time must have been spent wondering and perhaps arguing - was He really alive? How could they know it was really Him? This kind of thing, coming back to life after you’re dead, this doesn’t happen in this real world, there must be some mistake!

Then two of the followers, not of the twelve, but the two that had gone to the village of Emmaus, came in, excited and bursting with their news. They had seen Him! They had walked with Him for seven miles and He had told them wondrous things! They had only recognized Him when He broke bread and ate with them. "Don’t doubt us, it really was Jesus!"

And then as they all talked and argued, there He was, standing with them in the room. "Peace be unto you," He said, and He showed them His hands and feet and His side, where he was wounded. He calmed them, and told them that just as he had come down to mankind, so they must go out and teach to all people all the true things that He had taught in the years He was with them.

It was these truths about how to live one’s life that were saving, not the disciples themselves. These saving truths have the power to remit or retain sins, because they were from the Lord, the disciples only transmitted them from the Lord to those who would listen and take them to heart. Then He breathed on them - representing His holy spirit - so that they would not only want to pass these truths on to people, but would also be given the words to say whenever the times came. And then He was gone again.

The next verse tells us that the next Sunday they gathered again, and that Thomas was present this time. As before, the Lord was suddenly there, saying again, "Peace be unto you", and then directly to Thomas, "Reach hither thy finger… and reach hither thy hand… and be not faithless but believing". Now Thomas's response was, "my Lord and my God". It seems as if the Lord came this time just to convince Thomas, because it was Thomas who needed Him.

I think He does work this way. I am reminded of another story, from the gospel of Mark (Mark 9:17-27) where a father comes to Jesus with a young son who is possessed by a devil, and asks Jesus to cure him, and is asked in turn: "Do you believe I can do this?" In Mark 9:24 the father responds. Crying out, he said with tears, "I believe, help thou my unbelief."

I think many people have this conflict between lingering doubts and a desire to have the doubts taken away. If we carry on and make our decisions in life as if the doubts were indeed gone, then indeed they will lose their strength and actually will be gone.

These are the only details given of these two meetings in Jerusalem. Chronologically the next post-Easter stories are the ones that take place in Galilee.

John does go on to say at the end of his gospel "...many other signs truly did Jesus in the presence of His disciples which are not written in this book. But these are written that ye might believe that Jesus is the Christ, the son of God...." (John 20:30-31). Perhaps there were more post-Easter stories that weren't written down, but the ones we do have are strong. For the disciples who were involved, there was an unstoppable impact from the life and teachings of the Lord, and His crucifixion, and physical death, and now - in these stories - His resurrection. Hearing the Lord's charges to them, these Galilean fishermen and their colleagues launch out into the wide world, and work to achieve the Great Commission, enduring hardships and persecution, and succeeding - probably beyond their wildest dreams!