Should we picture the Lord? If so, how? 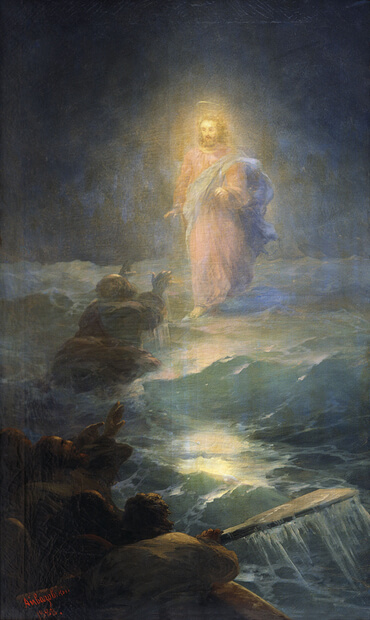 Why should we have a mental picture of the Lord? Why was it important for pre-Christian people to NOT make pictures of Jehovah? Then with the Lord’s birth, that seemed to change – so now why do we need a mental picture that we can relate to?

Pre-Christian people had various, and often simple, ideas of God as human, but many people then were also very prone to idolatry. They worshipped statues, golden calves, Dagon, and numerous other deities. Rachel, when she left Laban's household, took "the household gods" with her. (Genesis 31:30-35)

The Ten Commandments forbid "any carved image, or any likeness" of anything: "you shall not bow down to them nor serve them…." (Exodus 20:4-5)

When Moses asked to see God’s glory, he was told, "Thou art not able to see My face; for men shall not see Me and live." (Exodus 33:20). But YHWH did put Moses in a cleft of a rock, and sheltered him with His palm, and passed by Moses with His glory; Moses saw His back, but not His face. (Exodus 33:21-23)

At various times Moses argued with God as with a man, and in the Old Testament YHWH often spoke in human words, through an angel. But people did not see God in what could be called God’s own form. A few individuals saw the Angel of YHWH, who spoke for God. They thought of God as human, NOT as an impersonal force. In 1 Kings 22:13-23 the prophet Micaiah says he saw YHWH "sitting on His throne, and all the host of heaven standing by, on His right hand and on His left." YHWH asked this gathering how to persuade Ahab to "go up, that he may fall [be struck down] at Ramoth Gilead." After some discussion a spirit was apparently allowed to convey a lying message to Ahab. Clearly Micaiah and others regarded YHWH as some kind of human God.

But on the whole the pre-Christian Israelites thought little about a visible form of the one God. YHWH seemed distant, invisible, changeable and somewhat arbitrary. YHWH was Creator and law-giver, and demanded obedience, with good rewards for His followers and punishment to the proud and disobedient. If a visual image of God had been allowed, what kind of picture or image would it have been, or could it have been? Possibly like the brief description of the "Ancient of Days" with hair like pure wool, in a white garment sitting on a throne of fiery flame. (Daniel 7:9) It's hard to imagine an acceptable picture of God for pre-Christians, before He actually came to earth in His own human form.

This completely changed when He came to earth, born as Son of God, and gradually made His human mind (and body) Divine. He brought Divine love (from His soul) into all His human qualities – even loving His enemies. He went through a Divine rebirth of His human, and "glorified" it while living on this natural space-time plane where we live. He became YHWH in His flesh on earth, visible for all. His life was recorded in the four Gospels, with numerous teachings, healings, and miracles, and numerous examples of treating others with authentic love, while also treating evil for what it was. Seeing God Himself in Jesus Christ on earth, also gives a true picture and image of God that we can trust, and worship. No photos or portraits, which might lead back into idolatry. But from artists many, many pictures and images show what we know from the Gospels – a living picture of God in natural form, showing Jesus as Divine love in human shape.

We’re invited to picture Jesus as the face of God. Jesus said to Philip, "Have I been with you so long, and yet you have not known Me, Philip? He who has seen Me has seen the Father, so how can you say, ‘Show us the Father’? Do you not believe that I am in the Father, and the Father in Me?" (John 14:9-10; and other passages in John; and see Arcana Coelestia 10579.)

The writer of the Book of Hebrews calls Jesus "the brightness of [God’s] glory and the express image of his substance, and upholding all things by the word of his power". (Hebrews 1:3)

Paul calls the Lord "the image of the invisible God…." (Colossians 1:15) "For in him dwells all the fullness of the Godhead bodily." (Colossians 2:9)

"For it is the God who commanded light to shine out of darkness who has shone in our hearts to give the light of the knowledge of the glory of God in the face of Jesus Christ." (2 Corinthians 4:6)

"Great is the mystery of godliness: God was manifested in the flesh…." (1 Timothy 3:16)

These and other statements make it clear that Jesus Christ shows us God; that we see God in Jesus Christ.

Never before had it happened, that YHWH God could be seen in a real live human being on earth, enabling us to picture and see and understand God truly, in a human form of authentic love. Some dangers of idolatry remain – e.g., some images and religious practices and processions among some Christians. But the Lord’s teachings themselves (in the Old and New Testaments, and very much in the Heavenly Doctrines) discourage excessive external worship centering on images. Artists have produced so many visual images of the Lord that we can have a sense of God’s loving humanity for all, without focusing on just one image.

But what about the pre-Christians – were they left spiritual orphans? Their churches were representative churches, and their way to heaven and regeneration differed somewhat from the one that Jesus Christ opened. They never enjoyed the spiritual light that became possible after the Lord came to earth; they knew not the Gospels’ living pictures of good will to every neighbor. But many certainly came to heaven and formed spiritual and heavenly kingdoms. The Most Ancient Church people were especially innocent and good, and close to God, though not as close as is possible now. And SINCE His coming, these pre-Christians do now have fuller and clearer conjunction with God, as foretold in Isaiah: "The light of the moon shall be as the light of the sun, and the light of the sun shall be sevenfold, as the light of seven days, in the day that YHWH binds up the breach of his people." (Isaiah 30:26)

True Christian Religion 109 tells how Christianity brought profound and fundamental spiritual changes. Still, the pre-Christians had full opportunity to be led to heaven, through the religions that were available to them. The light, life, and uses in their heavens were more limited, but now have grown greatly since the Lord’s First and Second Comings. As human life worsened in the centuries before the Lord came by human birth, evil multiplied and almost destroyed the providential spiritual balance and free choice on earth (as evidenced in ancient history, e.g. Caesar’s life and wars). This spiritual decay spread because the ancient representative Word and churches did not provide enough truth or understanding of God. So the Lord came to earth to restore His power and control over hell, and bring His love and light down to earth, first in His (Jesus’) own natural mind – and since then to humans on earth, and also in shining light for all the heavens.

Finally, here is a very strong, inspiring goal for the New Christian Church:

"it will worship one visible God , in whom is the invisible God, as the soul is in the body…. Joining together with an invisible God is like the eye’s grasp of the universe, whose end is beyond its sight; or like vision in mid-ocean. But conjunction with a visible God is like beholding a man in the air or on the sea, spreading forth his hands and inviting all to his arms.” (True Christian Religion 787)