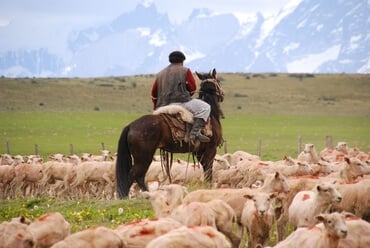 There are north of seven billion people on earth. Christianity is the biggest religion, with more than 2 billion people... which leaves 5 billion who might wonder what Christians think will happen to non-Christians!

In the Gospel of John, there are seven places where Jesus likens himself to something metaphorical, sometimes called the 7 "I am" statements. Some of them can sound pretty exclusive. Let's take a look at the texts:

Here are three statements that are clear promises to people who are actual Christians -- i.e., they believe in it, and they live by it. They aren't excluding anyone, but there's certainly an implication that this is THE way:

“Then spake Jesus again unto them, saying, 'I am the light of the world: he that followeth me shall not walk in darkness, but shall have the light of life'.” (John 8:12)

Next, here are two more statements that make a similar promise, but that also state that if you don't accept Jesus, you won't be saved:

“I am the true vine, and my Father is the husbandman... Abide in me, and I in you. As the branch cannot bear fruit of itself, except it abide in the vine; no more can ye, except ye abide in me. I am the vine, ye are the branches: He that abideth in me, and I in him, the same bringeth forth much fruit: for without me ye can do nothing. If a man abide not in me, he is cast forth as a branch, and is withered; and men gather them, and cast them into the fire, and they are burned.” (John 15:1, 4, 5, 9)

Earlier in John's gospel, there's a 6th "I am" statement, or really a nested pair of statements. They have two special characteristics. Here's one of the pair:

“Jesus said to them, "I am the bread of life. He who comes to me will not be hungry, and he who believes in me will never be thirsty." And further, "No one can come to me unless the Father who sent me draws him, and I will raise him up in the last day." (John 6:35, 44).

There's a new idea here. The "Father" draws people to Jesus. This is a reference to the influx from the Divine into our minds, that is pulling us out of our swamp. This "pull" gets us to open the Word, to "come to Jesus", to seek spiritual guidance.

In this same story, in John 6, Jesus also says this,

This was a tough teaching. It seems like many people didn't understand that Jesus wasn't talking about literal flesh and blood. In verses 60 and 66, it says,

"Many therefore of his disciples, when they had heard this, said, This is an hard saying; who can hear it? ... From that time many of his disciples went back, and walked no more with him. (John 6:60, 66)

There's been a long argument in the Christian church about the meaning of this. Was Jesus talking about his actual blood? His actual flesh? Were Christians supposed to practice cannibalism? No. In New Christian thought, we're always looking at the internal significations of the words in the literal sense. Bread and flesh refer to good. Blood and wine refer to truth. We need to try to be good, and to try to learn truth. Jesus was showing us what good looks like, and teaching us true ideas.

Here's a passage from one of Swedenborg's works:

There's much more detail in that referred-to section, and in the following ones; they convincingly base this interpretation on many Bible passages. They're well worth reading!

Now, getting back to the "I am" statements... here's the seventh one. It shows some ecumenism:

These other sheep are people of the spiritual church, "those guided and governed by spiritual truth and good". Arcana Coelestia 7035.

Today, wherever people seek true wisdom and practice a genuine love towards their neighbor, those are the "other sheepfolds". There's spiritual truth and good in all corners of the earth. From the dawning of spiritual awareness, the Lord's love and wisdom has been flowing into people's minds -- received dimly or clearly, or sometimes mostly rejected. When, relatively recently, oral traditions gradually gave way to written ones, the "Ancient Word", as Swedenborg names it, was spread across much of the inhabited world. Fragments of it were preserved in the Old Testament, and in other ancient sacred texts.

In John 10:14, while there's an expectation that the sheepfolds will converge into one, it's not disqualifying to be in another fold now. That's something that we need to dig into. Does a person have to be Christian to be saved? What if they are a good Buddhist whose ruling love is a love of the neighbor? Or a good Muslim who seeks to know and do the will of Allah?

Here's a striking passage from Luke:

From the Book of Revelation, there's this, too:

"After these things I saw, and behold, a great multitude, which no man could number, out of every nation and of [all] tribes and peoples and tongues, standing before the throne and before the Lamb, arrayed in white robes, and palms in their hands..." (Revelation 7:9)

Finally, here's a useful reinforcing quote from Secrets of Heaven 1032:

"The Lord has mercy on the whole human race. He wants to save everyone in the entire world and to draw all people to himself. The Lord's mercy is infinite; it does not allow itself to be restricted to the few within the church but reaches out to everyone on the face of the earth."

How do we reconcile the exclusive-sounding sayings with the inclusive-sounding ones? In New Christian teaching, anyone who is in a love of good, or in a love of truth where there is good, will be saved. And, we acknowledge that truth and good come from the Lord, not from ourselves. Anyone, in any belief system, who does not seek God's help in escaping evil loves and false ideas, will stay stuck. Anyone who genuinely, persistently, humbly seeks good and truth is in the "spiritual church", i.e., in one of the sheepfolds.

Do some sheepfolds have better pastures than others? Yes. Do religions vary in the amount of truth they convey, or in the quality of the practices that they recommend and live by? Of course they do. For the New Christian Bible Study, do we think that Christianity is the best road? Yes. Is it the only road? No. Is it the only destination? Maybe.

Jesus said He was the Way, the Truth, and the Life. He was the Word in human form -- spiritual truth. There's no way to salvation without setting out on the Way, seeking the Truth, and living a Life of good. You can start from anywhere. As you approach the top of the mountain, you'll be getting closer to the place where the light is clearest.