Adam, Eve and the Serpent 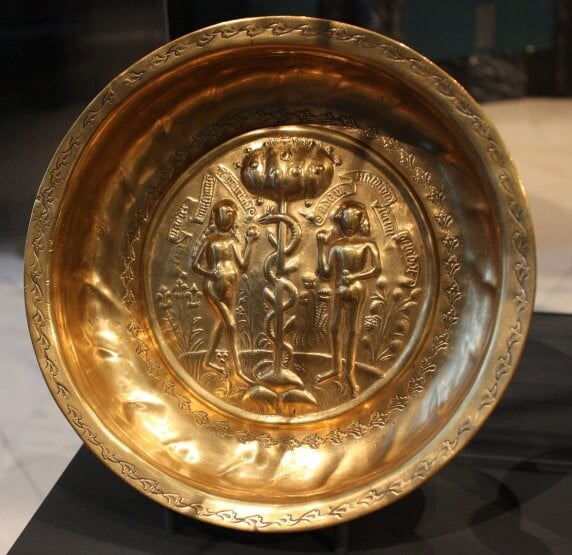 It’s ironic that the Bible story of Adam and Eve in the Garden of Eden is so often in the cross-hairs of the debate between science and faith; according to the Writings of Emanuel Swedenborg, the story itself is, in fact, about that very debate.

The Writings say that the “man” placed in the Garden of Eden represents a group of prehistoric people who lived in a state of love to the Lord and communion with heaven. They were pure and innocent, with wisdom coming to them as the fruit came from the trees of Eden. The Writings call this the Most Ancient Church, and it was as close as we’ve ever been to heaven on earth.

People of that time were aware, on an ongoing basis, that life flowed into them from the Lord, and was not their own. They were aware that their thoughts came from the Lord, and their affections; they not only knew, but also felt, that they did not exist from themselves. For many generations they embraced this blissfully, but eventually they began to feel a tug toward more of a sense of self. They didn’t want to be “just” recipients of life; they wanted to be alive from themselves. This is represented in the idea that it was “not good that the man should be alone.” And all the thoughts and affections of their exalted state – represented by naming the animals – did not satisfy that urge.

So the Lord took the lowest, least-life-receiving part of those people – represented by the rib bone – and built it into a new aspect of humanity, represented by the woman. This change left people cut off from direct communion with heaven (they had to “leave father and mother”), but allowed them to feel life as their own (to “cleave unto their wives”).

Initially, this was fine. The woman was made from a bone, which indicates evil, but was of flesh and blood, meaning that the evil was covered over by a love of good from the Lord. They were still innocent, were still in a state of love to the Lord, and could still receive wisdom from Him, all contained in the idea that they were naked, and not ashamed.

But then the serpent came on the scene – representing our physical senses and the power of reasoning from the evidence of the senses. This is the lowest and most external aspect of our minds, but a powerful and convincing one (and the one where we do science in the modern world). And the serpent questioned God, planting the seed: What if God had lied to them? What if the effect of the forbidden fruit was attaining all knowledge, knowing what God knew, defining right and wrong for themselves, actually being gods themselves?

The Tree of Knowledge – which was forbidden to Adam and Eve – represents using human logic and the evidence of the senses to explore God’s existence and His nature. The Lord knew the people couldn’t do this and maintain the humility and reverence necessary for the state of love they had lived in. But the question enticed them, playing on their sense of living of themselves. And finally they succumbed, acting from the sense of self and pulling their rational faculties – represented by the husband – into it as well.

When they did – when they launched a rational, evidence-based investigation of the Lord, He responded by “opening their eyes” and letting them see that in and of themselves they were evil, and only through Him could they have life and love what is good. Seeing their evil, they grabbed what they could – fig leaves represent external ideas of how to be good – and covered up as best they could.

So what does this mean about “original sin”? Well, in a sense we are still spiritually hobbled because of the way our ancestors turned away from the Lord. But we’re not individually eternally guilty for an offense none of us committed.

What does it mean about the literal accuracy of the story? The Writings clearly teach that it is not actual, literal history, that no two such people ever existed. In fact, the Writings say that the first 11 chapters of Genesis are remnants of a set of holy scriptures that came from descendants of the Most Ancient Church and which predate Biblical times. These works draw fully from the correspondences between natural things and spiritual things, using the deeply symbolic language of that age. What they really offer, then, is the spiritual history of early humanity, not the natural history – and isn’t the spiritual history more important anyway?

What does it mean about men and women? Well, “Adam” was not a man, and “Eve” was not a woman; both represented aspects of humanity, and they are essentially free of gender. So the fact that the story has been used to suppress and demean women is a pernicious misreading.

Finally, what does it mean about science and faith? It means they are two separate things, because physical reality and spiritual reality are two separate things. The people were free to expand their minds by eating of all the other fruit; but they were to leave the idea of God alone. And that warning still stands: If we try to use science to either prove or disprove the existence of the Lord, we will get thrown out of the garden.