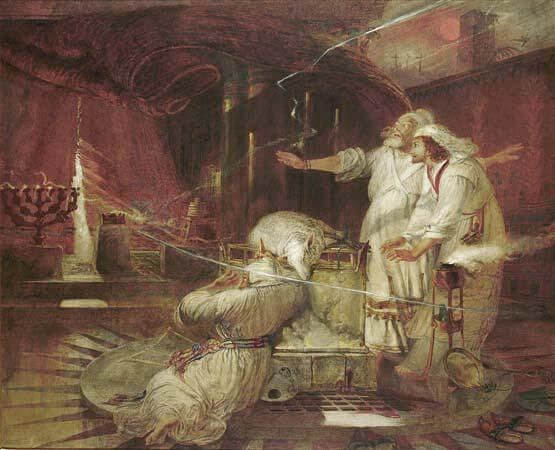 Title: Jesus, the Veil, and the Ten Commandments

Summary: This is a video Bible study on the meaning of the veil in the Old and New Testaments. We discuss what impact the events in the New Testament - particularly the tearing of the veil of the temple - have on applicability of the Ten Commandments to our lives.

Spirit and Life Bible Study broadcast from 10/5/2011. The complete series is available at: www.spiritandlifebiblestudy.com

Explaining the Inner Meaning of John 5

Verses 5:1, 2. That the Lord, as to his humanity, initiated himself into the doctrine of the church, which was in connection with the knowledges of good and truth derived from the Word, thus with truths introductory to good.

Verse 5:3. Which truths are imparted to all those who are made sensible of their natural infirmities and disorders, whether arising from a defect, of intelligence, or from intelligence not yet formed into life, or from faith separate from charity, and thus produce vivification through acknowledgement and faith.

Verse 5:4. And this in consequence of divine influx, so that whoever receives the knowledges of good and truth with his supreme affection, or love, experiences purification from evil, and restoration of spiritual life.

Verses 5:5, 6, 7, 8. Yet some, by reason of the unsettled state of their wills, make slower progress in purification than others, until they are excited to exploration of their secret purposes and intentions, and have their affections and thoughts thereby elevated, so as to live according to the truth.

Verse 5:9. In which case they also are restored to the life of heaven, whilst the doctrine, in which they believe, is elevated to that life, so as to influence their lives, and thus introduce them into a state of eternal rest and peace.

Verses 5:10, 11. That they, who are of the perverted church, are offended on this occasion, and are instructed that all elevation of doctrine to conjunction with the life of heaven is an effect resulting from the divine love of the Lord, in his Divine Humanity.

Verses 5:12, 13. Hence they are led to seek knowledge concerning that Divine Humanity, but are not permitted, by reason of the evils and falsities in which they are principled, to attain such knowledge.

Verse 5:15. Being therefore thus cautioned, they bear testimony to the Lord's Divine Humanity, as being the only source, of all spiritual and eternal life.

Verse 5:16. But are opposed in this testimony by those of the perverted church, who abide in representative worship, and do not discern how all representatives had reference to the union of the Divine and Human nature in the Lord.

Verse 5:17. Wherefore these latter are instructed, that the union of the two natures is effected reciprocally.

Verse 5:18. But this instruction only excites more of evil, being perversely interpreted as tending not only to destroy all representative worship, but also to confound divinity with humanity, and humanity with divinity.

Verse 5:19. Therefore they are further instructed, that divine truth can do nothing of itself, but from the divine good, and thus divine truth in the Lord's humanity always operates in conjunction and agreement with divine good in his divinity.

Verse 5:20. And this in consequence of the divine love, which manifests to its humanity all its purposes, until its humanity is fully glorified, or made divine, that so mankind may be led to adoration.

Verse 5:21. And also to the discovery, that by virtue of such glorification, the humanity receives from the divinity the power of imparting spiritual life, and thus of delivering man from the power of evil.

Verse 5:22. Also the power of arranging the several principles of the human mind, and thus of separating the evil from the good, which cannot be effected by the divine good alone without the divine truth.

Verse 5:23. To the intent that thus the Humanity of the Lord may always be seen in union with his divinity, and regarded as an equal object of worship and adoration, since otherwise the divinity itself cannot be worshipped and adored.

Verse 5:24. They therefore, who obey the divine truth, and approach the Lord in his Divine Humanity, are admitted into heaven, and never separating truth from good, are raised from a state of damnation to a state of salvation.
For since the assumption of the Human [principle] by the Divine, all who are in ignorance may learn the truths of faith, and may thus be gifted with spiritual life.

Verse 5:26. Inasmuch as the internal of the Lord being Jehovah, his Humanity has independent and underived life, alike with his divinity.

Verse 5:27. And has also the power of separating evil from good, and thus of arranging all goods and truths, as being itself the supreme truth.

Verses 5:28, 29. So that at his appearing even natural men shall be instructed in the divine truth, and if they obey it, shall attain spiritual life; but if they be disobedient, shall immerse themselves in spiritual death.

Verse 5:30. For the Humanity of the Lord operates solely from the divinity in itself, and is thus in divine truth from divine good, because in all things it exalts the divine good.

Verses 5:31, 32. Therefore divine truth claims no authority to itself separate from divine good, but only in union with that good.

Verses 5:33, 34. Neither does it claim authority from human testimony, but from its own divine power of communicating spiritual life.

Verse 5:35. Yet the testimony of man in favour of the divine truth is grounded both in good and truth, and has a tendency to impart to others those heavenly principles.

Verse 5:36. Nevertheless the glorification of the Lord's Humanity, the subjugation of the hells, and the consequent redemption of mankind, are the fullest proofs that the Lord is one with Jehovah.

Verse 5:37. Thus the divine good, which in itself is invisible, testifies that it is made visible in the Divine Humanity, which it assumed for that purpose.

Verse 5:38. But this is not believed by those, who are not enlightened and enlivened by the truth of that good.

Verse 5:39. Therefore all such are exhorted to explore the Holy Word which contains that truth, and which testifies throughout concerning the assumption and glorification of the Lord's Humanity.

Verse 5:40. Nevertheless they, who are of the perverted church, will not draw near to and abide in that Humanity, although there is no other source of good and of truth.

Verses 5:41, 42. Which Humanity testifies that it is purely Divine, and that they who reject it have no genuine affection of truth.

Verse 5:43. Therefore they do not approach the Eternal in his Divine Humanity, because they believe the truth to be unconnected with that its divine source.

Verse 5:44. And this in consequence of exalting human authority above the authority of divine truth.

105 - The Process, Nature, and Rewards of Loving God (includes fish re water)

The Pool of Bethesda

believe
The meaning of "believe" in the Bible is pretty straightforward, but runs deeper than what appears on the surface. When in the Old Testament people...

How Does The Lord Work In My Life?
Spiritual tasks offer a reflection on a Biblical story and suggest a task for spiritual growth.
Activity | Ages over 18

Rise, Take Up Your Bed and Walk
Worship Talk | Ages over 18

The Miracle at the Pool of Bethesda
When the Lord told the sick man, "Take up your bed and walk," He meant that the man should walk on a path that would lead him toward heaven.
Worship Talk | Ages 7 - 14

The Pool of Bethesda
Family lessons provide a worship talk and a variety of activities for children and teens..
Religion Lesson | Ages 4 - 17

The Pool of Bethesda
Think of this man waiting and watching. Over and over again, he saw that the waters were stirred up, and he tried to get up from his bed and go down into the pool.
Worship Talk | Ages 4 - 6

The Pool of Bethesda
Like the man who sat beside a pool for thirty eight years waiting for help we also make excuses in the struggle to let go of bad attitudes and habits.
Sunday School Lesson | Ages 11 - 17