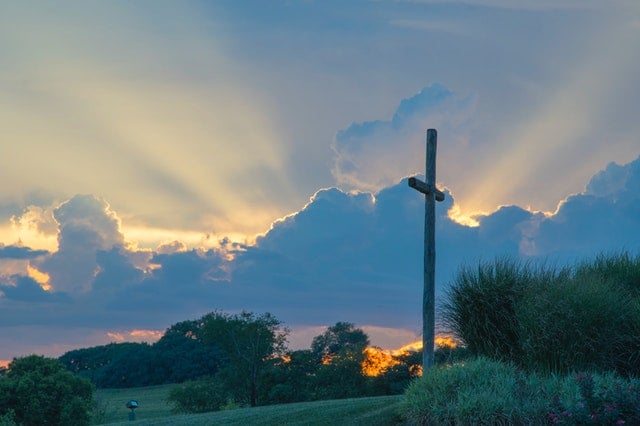 Almost 2000 years ago, Jesus of Nazareth -- Jesus Christ -- was crucified. He died. Painfully. And then, by the second morning after that, He was risen from the dead. His physical body was gone - or, rather, in light of subsequent events, it seems to have been transformed into a spiritual one. (That's an interesting thing to think through, in itself, but it's not the focus of this article.)

Instead, here we want to focus on some of the things that are said in the Bible about why Jesus died. There's an almost-2000-year-old confusion about it. Let's dig into it...

In Mark 10:42-45 (and in Matthew 20:25-28), we find this well-known lesson, which occurs late in Jesus's ministry. James and John - still not really understanding the depth of what was going on, are lobbying Jesus for promises of sitting at His left and right hand when he is "king". The other disciples are displeased, of course. Jesus knows what's going on, so He gathers them all, and tries to explain the real nature of His mission, and what their mission should be, too.

"But Jesus called them to him, and saith unto them, Ye know that they which are accounted to rule over the Gentiles exercise lordship over them; and their great ones exercise authority upon them. But so shall it not be among you: but whosoever will be great among you, shall be your minister: And whosoever of you will be the chiefest, shall be servant of all. For even the Son of man came not to be ministered unto, but to minister, and to give his life a ransom for many."

A ransom. The Greek word used here is λύτρον, or lutron, which means the price for redeeming or ransoming, from λύω, luo, for loosening, untying, or setting free.

Some theologians have taken this text, and combined it with the text from the crucifixion story, when Jesus says three things that show his distress, and his feeling of separation from his Divine essence -- "My God, my God, why hast Thou forsaken me?", and "Nevertheless, not my will, but Thine be done", and "Father, forgive them, for they know not what they do."

It can certainly be interpreted as a sort of sacrifice, in which Jesus acts as a sort of scapegoat, substituting his death for the human race that had disappointed His Father. Some theologians have done that. Anselm of Canterbury, in around 1000 AD, was one of the leaders of a faction that made that argument. But we don't think that's the right track; in fact, we think it was a wrong track that's been pretty damaging.

In New Christian theology, it doesn't make sense that God was angry. He's love itself. Is He disappointed when we don't reciprocate His love? Sure. But angry? No. There's certainly the appearance of it, especially in the Old Testament at times, but the core nature of God is love.

What's more, it should be even clearer that the death of Jesus's physical body wouldn't make God the Father feel better. Remember, they are really ONE person, of one mind - not two.

Instead, the whole cycle of God's incarnation, ministry, physical death, and resurrection was undertaken so that new truths could reach humankind.

"The Lord, being love itself, or the essence and life of the love of all in the heavens, wills to give to the human race all things that are His; which is signified by His saying that the Son of man came to give His life a ransom for many."

Further, in Apocalypse Explained 328:15, we find this explanation:

“The phrase ‘to ransom’ means to free people from falsities and reform them by means of truths. This is signified by the words, ‘Ransom [redeem] me, O Jehovah, God of truth’” (Psalm 31:5)

One reason Jesus died was to overcome the power of hell. Jesus fought against evil spirits throughout His life. The clearest description of this is just after his baptism, when he spends 40 days in the wilderness. His suffering on the cross was the final struggle against evil, and His resurrection was his final victory over it.

There are other reasons mentioned, too:

In Swedenborg's True Christianity 86, it says,

"Jehovah God came into the world as divine truth for the purpose of redeeming people. Redemption was a matter of gaining control of the hells, restructuring the heavens, and then establishing a church."

At the crucifixion, the forces of evil thought they had won. The religious and civic powers of the day led the way in condemning him. He was mocked. The crowd turned against him.

The death of Jesus' physical body was a "ransom" in this way: by undergoing that torture and death, He could then show that his spiritual power transcended natural death. He freed us, loosened us, from domination by the hells, and established a new church -- a new way that we can follow.

28 Ye have heardheard how I saidsaid unto you, I gogo away, and comecome again unto you. If ye loved me, ye would rejoicerejoice, because I saidsaid, I gogo unto the Father: for my Father is greater than I.