The Inner Meaning of the Prophets and Psalms 121

What the Bible Says about Being Born Again 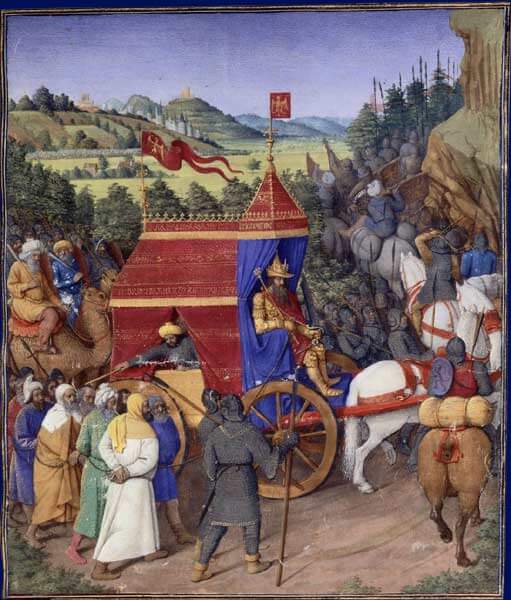 In the Bible, King Jehoshaphat of Judah is mentioned in the first Book of Kings, in Chapters 21 and 22. He comes to the throne of Judah during the reign of Ahab in Israel.

He has the wisdom not to trust King Ahab completely, or Ahab's prophets. In one story, he consults Micaiah, the prophet, about going to war as an ally of Ahab's, against the King of Syria. Micaiah says that Jehovah will bless the venture, but that Ahab will be killed. Ahab hears this, and takes precautions, convincing Jehoshaphat to wear Ahab's robes, while Ahab dresses as a common soldier. Despite that, Ahab is killed, even while Ramoth-gilead is taken.

Later, Jehoshaphat has another victory against the Moabites. He seems to have been a good king overall, walking in the ways of his father, Asa, who was also a good king. He doesn't eliminate idol worship in the high places; and his ships fail to go to Tarshish. These are the two negative statements about him in the literal sense.

Swedenborg's works refer to him in only two places. Interestingly, both references mention negative points:

King Jehoshaphat built ships of Tarshish to go to Ophir for gold; but they went not, for the ships were broken at Ezion-geber (1 Kings 22:48).

In this verse, Jehoshaphat seems to represent a corruption of the church, which takes place by falsifying truth. Here's an excerpt from Swedenborg's work, Apocalypse Explained:

"[t]hat the 'ships' under king Jehoshaphat 'were broken' signifies the devastation of the church in respect to its truths and goods." (Apocalypse Explained #514[7])

A valley near Jerusalem is called the Valley of Jehoshaphat. In the Book of Joel, chapter 3, there is a prophecy about it:

"12 Let the heathen be wakened, and come up to the valley of Jehoshaphat: for there will I sit to judge all the heathen round about." (Joel 3:12)

There's a reference to this passage, in Apocalypse Explained, also:

"That judgment then takes place is plainly declared, 'the valley of Jehoshaphat,' where judgment is executed, signifying the falsification of the Word." (Apocalypse Explained #911[7])