1 Set the trumpet to thy mouth. He shall come as an eagleeagle against the house of thehouse of the LORDLORD, because they have transgressed my covenant, and trespassed against my law.

4 They have set up kings, but not by me: they have made princes, and I knewknew it not: of their silversilver and their goldgold have they made them idols, that they may be cut offcut off.

5 Thy calfcalf, O SamariaSamaria, hath cast thee off; mine angeranger is kindled against them: how longlong will it be ere they attain to innocency?

6 For from IsraelIsrael was it also: the workmanworkman made it; therefore it is not GodGod: but the calfcalf of SamariaSamaria shall be broken in pieces.

7 For they have sown the windwind, and they shall reapreap the whirlwind: it hath no stalk: the bud shall yield no mealmeal: if so be it yield, the strangers shall swallowswallow it up.

8 IsraelIsrael is swallowedswallowed up: now shall they be among the GentilesGentiles as a vessel wherein is no pleasure.

9 For they are gone up to Assyria, a wild ass alone by himself: EphraimEphraim hath hired lovers.

10 Yea, though they have hired among the nationsnations, now will I gather them, and they shall sorrow a little for the burdenburden of the king of princesprinces.

12 I have writtenwritten to him the great things of my lawlaw, but they were counted as a strange thing.

The Inner Meaning of the Prophets and Psalms 191

house
A "house" is essentially a container - for a person, for a family, for several families or even for a large group with shared interests...

house of the
'The house of the prison' denotes the vastation of falsity, and also falsity itself.

the Lord
The Bible refers to the Lord in many different ways, which from the text seem indistinguishable and interchangeable. Understood in the internal sense, though, there...

lord
The Lord, in the simplest terms, is love itself expressed as wisdom itself. In philosophic terms, love is the Lord's substance and wisdom is His...

Israel
'Israel,' in Jeremiah 23:8, signifies the spiritual natural church. The children of Israel dispersed all the literal sense of the Word by falsities. 'The children...

cry
As with most common verbs, the spiritual meaning of “crying” or “crying out” (meaning a shout or wail, not weeping) is highly dependent on context....

God
The Lord is love itself, expressed in the form of wisdom itself. Love, then, is His essence, His inmost. Wisdom - the loving understanding of...

good
It seems rather circular to say that “good” in the Bible represents good, but in a general sense it’s true! The case is this: The...

enemy
An enemy in the Bible refers to people who are in the love of evil and the false thinking that springs from evil. On a...

pursue
'To pursue,' as in Genesis 14:16, signifies a state of purification, because 'to pursue enemies' is the expulsion of evils and falsities which were with...

knew
In a general sense, men represent things of the intellect – facts, ideas, knowledge, everything from the deepest truths to the most pernicious falsities about...

silver
'Silver,' in the internal sense of the Word, signifies truth, but also falsity. 'Silver' means the truth of faith, or the truth acquired from selfhood,...

calf
Calves of the lips (Hos 14:2) are confessions from the affection of truth.

Samaria
'The woman of Samaria' signifies the church which would be founded among the Gentiles.

long
'Long' and thence to prolong, refer to good.

wind
Because a nearer and stronger divine influx through the heavens disperses truths among the wicked, 'wind' signifies this dispersion of truth and the resulting conjunction...

Meal
'Meal and farina' signifies the truth of faith, or truth from good.

gentiles
'The time of the heathen,' as mentioned in Ezekiel 30:3, signifies the heathen, or wickedness.

Ephraim
Ephraim was the second son born to Joseph in Egypt and was, along with his older brother Manasseh, elevated by Jacob to the same status...

nations
'Nations' signify people who are in the good of love and charity from the Lord. Two nations in the womb,' as in Genesis 25:23, signify...

Burden
A burden (Jer. 17:4) signifies that which is from the proprium of man.

altars
The first altar mentioned in the Word was built by Noah after he came out of the ark. On that altar, he sacrificed clean animals...

written
In John 8:2-11, the Lord wrote twice on the ground, when the woman taken in adultery was brought to him, which signifies the condemnation of...

law
All laws, even civil and judicial laws, which are in the Word, correspond to the laws of good and truth, which are in heaven.

flesh
Flesh has several meanings just in its most obvious form. It can mean all living creatures as when the Lord talks about the flood "destroying...

Remember
'To remember,' as in Genesis 41:9, signifies conjunction. 'Remembering' denotes conjunction because the remembrance of anyone in the other life joins them together, because as...

iniquity
In Isaiah 59:6, 'webs' and 'garments' signify aspects of the understanding, or thought, 'Iniquity' and 'violence,' aspects of the will, or works.

visit
The end time of the church and each individual, is called 'the visitation,' and precedes judgment. 'Visitation' is nothing but an exploration of the quality...

sins
In the Word three terms are used to mean bad things that are done. These three are transgression, iniquity, and sin, and they are here...

return
Everyone knows the phrase "the natural order of things." It means that everything is in its proper place, occupying the niche it is meant to...

forgotten
To forget, in the internal sense, signifies nothing else but removal and apparent privation.

buildeth
wrought (also entwined or entwisted) is predicated of the natural scientific principle, and in Isaiah 45:13, of divine natural truth.

judah
City of Judah,' as in Isaiah 40:9, signifies the doctrine of love towards the Lord and love towards our neighbor in its whole extent.

Cities
Cities of the mountain and cities of the plain (Jer. 33:13) signify doctrines of charity and faith.

send
'Being sent' everywhere signifies, in an internal sense, going forth, as in John 17:8. In similar manner, it is said of the holy of the...

fire
Just as natural fire can be both comforting in keeping you warm or scary in burning down your house, so fire in the spiritual sense...

devour
When we eat, our bodies break down the food and get from it both energy and materials for building and repairing the body. The process...

The children of Israel dispersed all the literal sense of the Word by falsities.

'The children of Israel,' in Isaiah 14:2, signify the Gentiles. 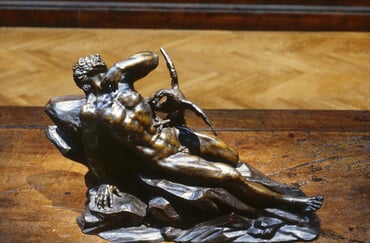 As with most common verbs, the spiritual meaning of “crying” or “crying out” (meaning a shout or wail, not weeping) is highly dependent on context. Who is crying out? To whom? Why? Those things greatly affect the meaning of “cry.”

In most cases, though, crying has to do with speaking falsely, and of the emotions arising from the conflict between truth and falsity. When people cry out in distress it is most often an indication that they are being overwhelmed by false ideas. In other cases – especially regarding more joyful cries – it is a celebration of the triumph of truth.