39 And I will also givegive thee into their handhand, and they shall throw down thine eminent place, and shall break down thy highhigh places: they shall stripstrip thee also of thy clothesclothes, and shall take thy fair jewelsjewels, and leave thee nakednaked and bare.

The Inner Meaning of the Prophets and Psalms 139

What the Bible says about... Marriage and Spirituality

give
Like other common verbs, the meaning of "give" in the Bible is affected by context: who is giving what to whom? In general, though, giving...

High
'Height' signifies what is inward, and also heaven.

clothes
'To rend the garments' signifies mourning for truth lost or destroyed, or the loss of faith.

jewels
Jewels' when applied to the ears, signify good in act.

naked
'Unclothed' signifies being deprived of the truths of faith. 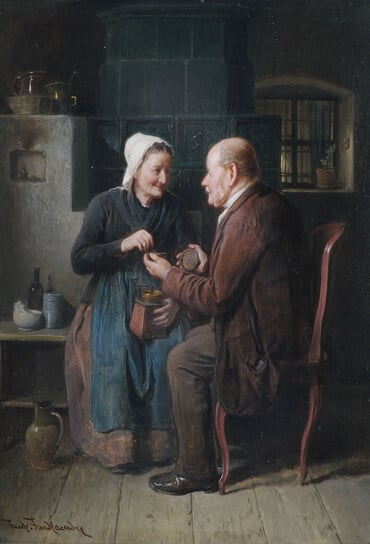 In general, men are driven by intellect and women by affections, and because of this men in the Bible generally represent knowledge and truth and women generally represent love and the desire for good. This generally carries over into marriage, where the man's growing knowledge and understanding and the woman's desire to be good and useful are a powerful combination. In many cases in the Bible, then, "husband" refers to things of truth and understanding, much as "man" does.

Magnificent things can happen in a true marriage, though, when both partners are looking to the Lord. If a husband opens his heart to his wife, it's as though she can implant her loves inside him, transforming his intellectual urges into a love of growing wise. She in turn can grow in her love of that blooming wisdom, and use it for joy in their married life and in their caring for children and others in their life.

Many couples, even in heaven, stay in that state – called "Spiritual" – growing deeper and deeper to eternity. There is the potential, though, for the couple to be transformed: through the nurturing love of his wife the husband can pass from a love of growing wise to an actual love of wisdom itself, and the wife can be transformed from the love of her husband's wisdom into the wisdom of that love – the actual expression of the love of the Lord they have built together. In that state – called "Celestial" – the husband represents love and the desire for good, and the wife represents truth and knowledge.

Unfortunately it's hard to tell, when reading the Bible, which meaning of "husband" a particular passage has. For that we have to look to the Writings or to context for guidance.

4823. 'And she conceived again and bore a son' means evil. This is clear from the meaning of 'a son' as truth and also good, dealt with in 264, and so in the contrary sense as falsity and also evil, though evil that arises out of falsity. Essentially this kind of evil is falsity, because it has its origin in this. For anyone who does what is evil arising out of false teaching does what is false; but because this falsity is realized in action it is called evil. The meaning which the firstborn carries of falsity and consequent evil is evident from the statement made here regarding this [second] son, to the effect that in action he did what was evil. The actual words are 'he spilled his seed on the ground, so that he should not provide seed for his brother; and what he had done was evil in the eyes of Jehovah; and He caused him to die also', verses 9-10. The fact that this evil arose out of falsity is also evident at that point. What is more, in the ancient Churches the secondborn meant the truth of faith realized in action; therefore the second son here means falsity realized in action, which is evil. It may also be recognized that evil is meant by this son from the fact that the firstborn was named Er by his father or Judah, but this son, Onan, by his mother, the daughter of Shua, as may be seen in the original language. For 'man' in the Word means falsity and his wife (mulier) evil, see 915, 2517, 4510; and so also does 'the daughter of Shua' mean evil, 4818, 4819. Therefore because he was given his name by his father, 'Er' means falsity; and because Onan was given his name by his mother, evil is meant by him. Thus the first was so to speak the father's son, the second so to speak the mother's son.

[2] In the Word the expression 'man and wife' (vir et uxor) is used many times, as also is 'husband and wife' (maritus et uxor). When 'man and wife' is used, 'man' means truth and 'wife' good; or in the contrary sense 'men' means falsity and 'wife' evil. But when 'husband and wife' is used, 'husband' means good and 'wife' truth; or in the contrary sense 'husband' means evil and 'wife' falsity. The reason underlying this arcanum is this In the celestial Church good resided with the husband and the truth of that good with the wife; but in the spiritual Church truth resided with the man and the good of that truth with the wife: Such is and was the actual relationship between the two, for in human beings interior things have undergone this reversal. This is the reason why in the Word, when celestial good and celestial truth from this are the subject, they are called 'husband and wife', but when spiritual good and spiritual truth from this are dealt with, these are called 'man and wife', or rather 'man and woman' (vir et mulier). From this, as well as from the actual expressions used, one can come to know which kind of good and which kind of truth are being dealt with in the internal sense of the Word.


[3] Here also is the reason why it has been stated already in various places that marriages represent the joining of good to truth, and of truth to good. Furthermore conjugial love has its origin in these two joined together. Among celestial people conjugial love has its origin in good joined to truth, but among spiritual people in truth joined to good. Marriages also correspond in actual fact to these joinings together. From all this one may see what is implied by the father giving the first son his name, but the mother giving the second and also the third sons theirs, as is clear from the original language. The father named the first son because the first son meant falsity, while the mother named the second son because the second son meant evil.

The New Jerusalem and its Heavenly Doctrine 121